For the last 10 years, I’ve been in the strange position of ushering in the new year not once, not twice but three times a year. That’s a lot of resolutions, people.

Sadly the only pose where my stomach fat doesn't show

There’s International New Year on January 1, followed by the Chinese / Vietnamese Lunar New Year that’s usually somewhere between the end of January and the end of February. And finally, Khmer New Year that falls on the same days as the Thai Song Kran in mid-April. Kind of like Groundhog Day, only better, because I got all those days off work. Because so many Cambodians have Chinese ethnicity somewhere up the family tree, hardly any students ever showed up for class during Chinese New Year, even though it wasn’t an official holiday. The others just used it as an excuse to play hooky. Finally my school decided that if you can’t beat ‘em, join ‘em.

So it was that I recently headed back to Cambodia for a visit during Khmer New Year. On the bus was an English/Vietnamese couple looking forward to the rowdy celebrations. They were disappointed when I sadly broke it to them that Phnom Penhites don’t really party for New Year like the rest of the Asian world.

It's only 9 o'clock. Where IS everyone?

There are no firecrackers or red lanterns like Vietnamese Tet. Nor the raucous water gun soakings like Thai Song Kran. Instead, city dwellers take the next bus, minivan, tuk-tuk or motorcyle and hightail it out of the city.

Roof seating. You know. For that windblown look.

The city eerily empties out as what seems like 70% of the people head back to their villages to be around family — playing cards, cooking and basically taking a break from city life. Entire markets close down for three days, families scurry to stock up on instant noodles and storefront after storefront are shuttered for the holidays. It didn’t always use to be like this. I remember when I first landed in Phnom Penh in 2001, you could always count on getting water bombed as you were driving along or at the very least a fistful of baby powder in the face. Now, the government’s clamped down on that sort of thing, so quiet dancing out in the suburbs is about the extent of it.

Four guys dancing around a table, partying like it's 1999

For me, though, it was perfect. It was a time to be with friends, eat great food and enjoy the blissful serenity of a city deserted, a welcome respite from the never-ending horn honking and snarled traffic of Saigon.

Subscribe to this blog to receive my next post on the Top 11 Things To Do in Phnom Penh, including imbibing at the very best happy hour in town, sampling deep-fried tarantulas and getting all your souvenir shopping done, painlessly and quickly.

Where to stay: With over 10,000 rooms available in Phnom Penh hotels and guest houses, you’d think there’d be a great selection. However, despite living in Phnom Penh for 10 years, I actually didn’t think there were all that many value-for-money properties. Sure, there are the USD 7-10 / night backpacker hotels that feature tiled walls and no hot water. I’ve had friends stay at Spring Guest House and the slightly nicer Townview Hotel and were fine with it.

Another option are the mini-hotels near the riverfront that provide easy access to the festive atmosphere of popcorn carts, young paramours, the odd elephant and early morning tai chi.

At the top range, Sofitel recently opened up a new property to join the handful of other international chains there, including Raffles and the InterContinental. My favorite of the large hotels was always the Himawari, a four-star property situated right on the banks of the Tonle Sap river. If you book it during one of the public holidays when there are fireworks, you’ll have the best seat in the house. 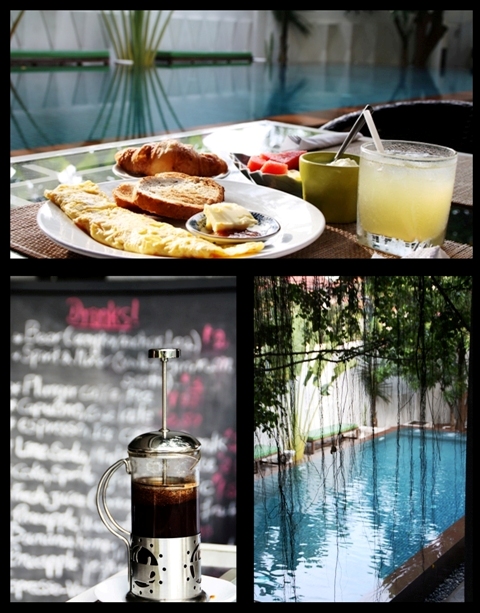 Surprisingly, there aren’t that many value-for-money mid-range options. So I was very happy to find Circa 51, a 10-room villa converted to boutique hotel. Within easy walking distance of the eclectic shops along Street 240, but still nestled deep enough in a residential area to completely block out traffic noise, the gorgeous pool provided respite from the heat. A full breakfast with your choice of eggs, pastries, homemade yogurt and fruit and a fresh coffee or juice ensured you were fueled up for a full day of sightseeing. The unexpected touches of luxury throughout the property, from the minty welcome drink to the LCD TVs in every room, were most welcome. Majid and Yvette, the proprietors, also own Saffron, a nearby café serving up delicious and filling Pakistani meals, which can be delivered to your room in minutes. Rooms start at USD 45 and include breakfast and good wifi.

Have you stayed in a hotel recently that exceeded your expectations? Share your experience in the Comments section! 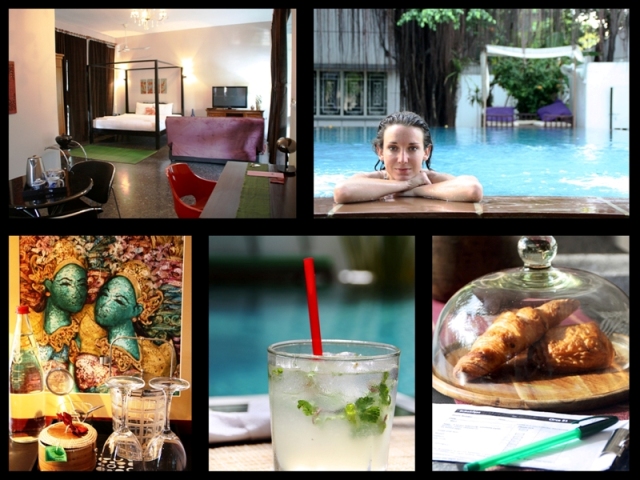 All in the details...