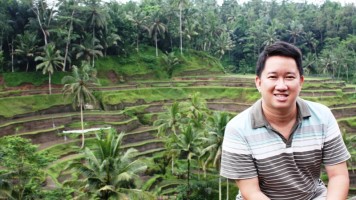 Now you see it, now you don’t. (Almost) scammed in Bali

I just had a genius idea. I tend to have those every now and then. But I really can’t take credit for this one. It just kind of happened.

About a year and a half ago, I was planning a Cairo to Capetown overland trip and was desperately trying to get a decent fare from Johannesburg to Nairobi. One way fares in Africa are expensive. Like, really expensive. So I checked out which US airline partnered with one of the African airlines and got a US Airways credit card. Long story short, I didn’t end up using the miles so had 25,000 miles set to expire. What to do?

A little internet search yielded a flight on a partner airline in Asia. The farthest I could go was either Nepal or India, both on my bucket list. So seeing as I had only a week of holiday and Indian visas are surprisingly expensive, the choice was made – Kathmandu, Nepal, here I come!

Before going, I admittedly knew nothing about Nepal. I just had in my mind scenes of gleaming white stupas high above the city, prayer flags fluttering in the wind. Nepal is sandwiched between China, Tibet and India, and you could see influences from all three countries. I also read that there are daily blackouts, “loadshedding”, sometimes for hours at a time, which turned out to be true!

I had never been to this part of the world and what greeted me was so much more than I could have imagined. Kathmandu is a bustling, sprawling city located in the Kathmandu Valley. On a clear crisp winter’s day, you’re able to see the surrounding mountain ranges. Unfortunately, I was there in spring, with beautiful crisp weather, perfect for walking, but often overcast.

The streets of Thamel, the touristy area of Kathmandu, are a warren of narrow, confusing one-way streets, crowded with shops selling trekking gear to the many tourists on their way to the Annapurna circuit and the most beautiful hand-knit sweaters made from all sorts of wool.

I almost wished I lived in a cold country! I did manage to snag some whimsical felt slippers for some toddlers back home. Other good buys were handmade paper and thangka paintings, incredibly ornate scenes meticulously painted by hand.

Lots of the souvenir kitsch was religious, featuring the ubiquitous eyes of Buddha, Ganesh or some other stylized deity.

The food for me was hit and miss. Loved the royal curd, a thick, smooth, delicately sweet yoghurt with the consistency of very soft cheese. Also tried the pungent cheese made from the milk of water buffaloes and the ubiquitous thali (set meals) which were the cheapest option around, at about $2 a meal.

At one restaurant, I had the option of lamb or buff, which I took as a bastardization of the French word “boeuf” (beef). I was surprised when the meat was extremely chewy. Turns out that “buff” was short for water buffalo! As many Nepalese are Hindu, few restaurants serve real beef! Indian-influenced samosas, freshly squeezed pomegranate juice and crispy onion fritters were just some of the street food available

for sampling. I also tried a few Chinese restaurants but was greatly disappointed. Nothing like the Americanized Chinese food back home or the southern Chinese food often found in Phnom Penh. But who cares? I was in Nepal!

Travel tip: Every few months, google the best travel credit cards. New deals are always popping up. Some have amazing bonus miles just for signing up and spending a relatively manageable amount. In this case, I paid the USD 79 annual fee and got back a ticket worth $800 in return. If you’re not ready to use the miles, check out the many options to keep your miles from expiring. In my case, I registered to take a few surveys which added tiny amounts of miles, but kept my account alive until I was really ready to use it. Most airline cards will only allow you to get the bonus once, but some very savvy travelers out there have found a way to go back to the well again and again, something called “churning”. Some companies will send you offers after a specific time period has gone by and allow you to sign up for another card with them (though usually not as good a deal as the original one). Just beware that multiple applications and closures can affect your credit score. But if you’re savvy, there are lots of deals to be had…