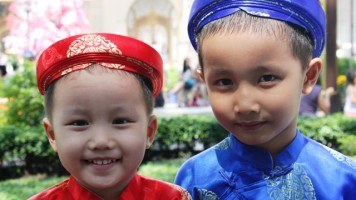 The Faces of the Season 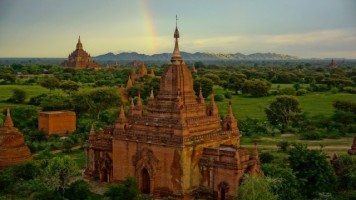 As a kid, my favorite TV snack wasn’t popcorn, peanut butter and apples, fruit roll-ups or any of the other typical “white people” snacks. 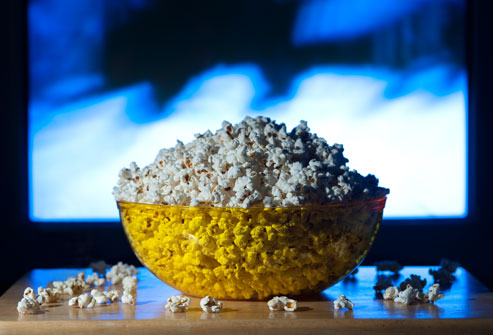 It was a big bowl of canned lychees over ice. Anytime I had a whole bowl to myself meant I had done something right. 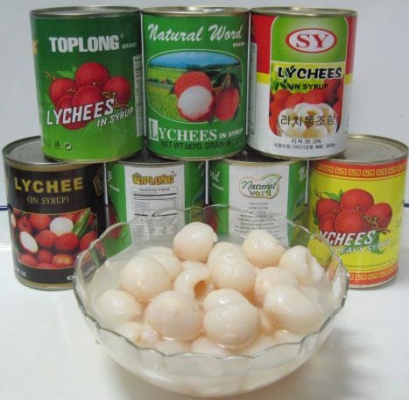 A mother’s love. Nothing says, ‘I love you’ quite like a bowl of lychees on ice.

This was way back in the day, before Whole Foods, when the most “ethnic” thing you could get in the “International” aisle of the local supermarket was taco shells and soy sauce.

Every once in a while, my mom would splurge and get some wildly overpriced exotic fruit from the Asian store like durian or jackfruit, but it was usually frozen and my parents would ration out little bites like shipwrecked survivors with the last package of crackers. Growing up in the US and without any food memories from Vietnam, I really didn’t appreciate what the fuss was all about.

But now that I’m in Asia, I’m spoiled for choice. Sometimes, I’ll walk past some fruit that I won’t even recognize. 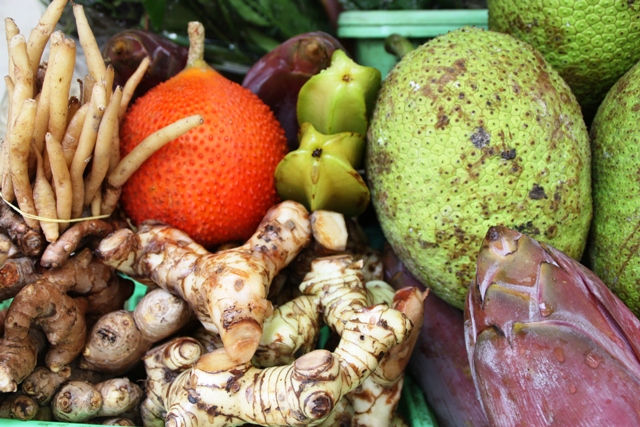 One of these items MAY be ginger, but I wouldn’t bet any real money on it…

Add to the mix all the weird English names like rambutan, mangosteen, sapodilla and all the various “apples” like star apple, custard apple and water apple, none of which really look or taste like “apple”.

But it’s true that we always want what we can’t have. In the States, I’d drool over really ripe mangos and all the other “exotic” fruits. But since I’ve been in Asia, I crave all the delicious fruit that can’t be grown in this tropical climate – stone fruit like cherries, peaches and plums, really crunchy apples and do not even get me started on raspberries and blueberries. Of course, there are stores that sell them here, but at outrageous prices. My local supermarket carries cherries, but a tiny carton of maybe 12 individual cherries costs USD5.

Which was why I was so surprised to see roadside shops selling bags of strawberries for USD4.50 a kilo. (Fun facts: Strawberries have been referred to in literature as “heart berries” or “fruit nipples”, and are the only fruit to have their seeds [about 200 of them] on the outside!) I bought a whole bag and sat there guiltlessly eating them by myself, just like when I was a kid with my bowl of iced lychees. I even emailed some of my friends back in Cambodia to brag about how cheap the strawberries were here. 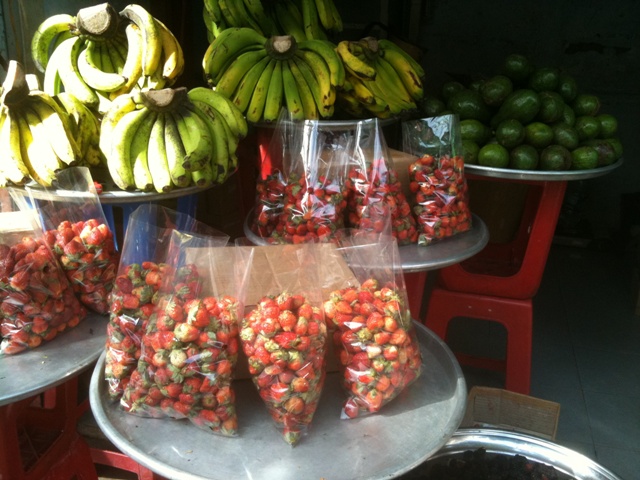 While they weren’t as sweet as the ones back in the States, they were good enough. Vietnam has a highland region, anchored by the city of Dalat. A trip there feels disconcertingly like you’ve stepped into Europe somewhere, with the cool temperatures, loads of pine trees and colorful row houses. But that same temperate climate means that Dalat is the only place in Vietnam that can produce things like strawberries, cauliflower, asparagus and roses.

A week later, I noticed the price had dropped. And it kept dropping bit by bit as the season wore on until I was able to buy a 3-kg box for just about USD7. And then I spied them. Something that looked almost like blackberries. I had to rub my eyes and give myself a bit of a pinch. They were actually mulberries, the leaves of which feed the silk worms which in turn produce silk threads. The Vietnamese typically turn the mulberries into a mediciney tasting wine, but I loaded up my bike with a second 3-kg box of mulberries and was on my merry way. 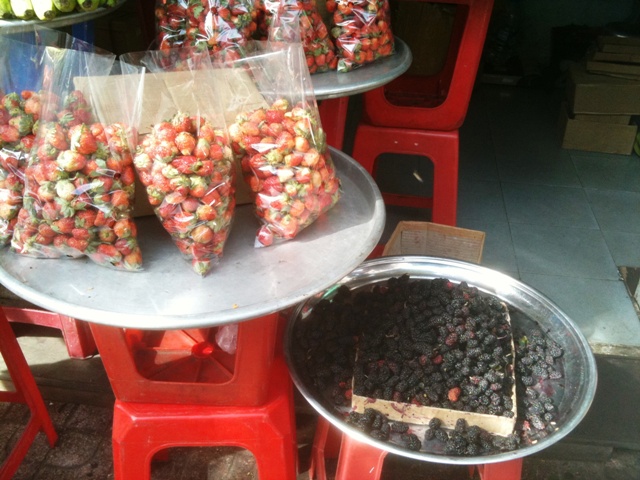 The holy grail of fruit

Back home, I dusted off the stove (which is usually only ornamental) and googled stewed berry recipes for my 6 kgs of berries (that’s like 13 lbs for my American friends!) And then I got my Martha Stewart on. 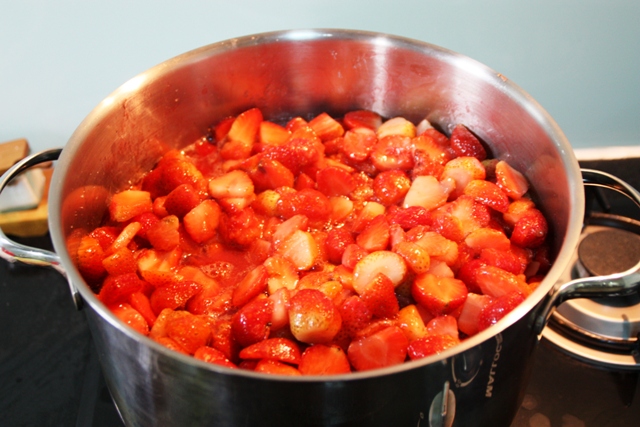 By hour three of cleaning and stewing, I was seriously questioning my sanity…

Since then, my freezer has been filled with containers of delicious strawberries and mulberries, just waiting to top some ice cream or a nice sponge cake with a bit of yogurt. 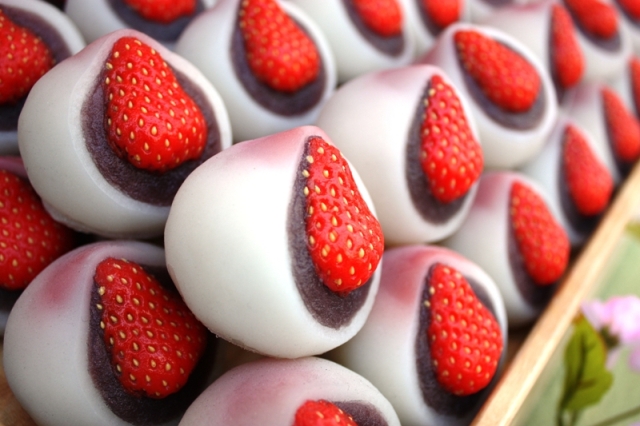 Perfection in every way

I had a preview of the Park Hyatt Saigon’s strawberry tiramisu, a delectable twist on the original. This version has no coffee, but is instead infused with strawberries to soak the biscuits. Traditional tiramisu ingredients like mascarpone cheese and cocoa powder are used but this version has another surprise — a light dusting of cinnamon which according to the Smell and Taste Foundation, is the scent (cinnamon buns, to be exact) that produces the greatest turn-on in men. Go figure! 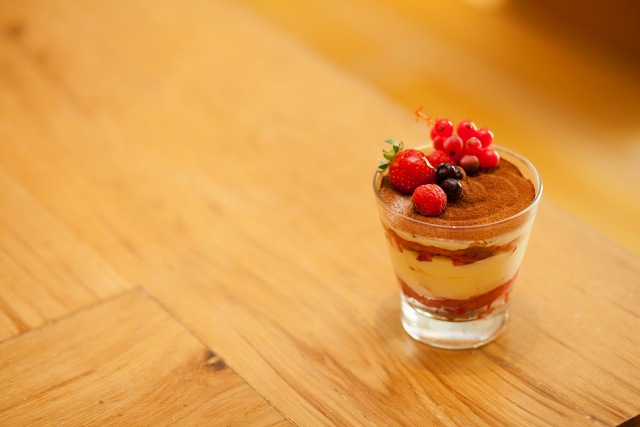 The bad news is that this gorgeous desert is only available at the Opera Restaurant for one day out of the year, on Valentine’s Day, as part of the San Valentino set dinner along with pan seared Pacific Ocean scallop, pumpkin ravioli with melted butter and Parmigiano, dill roasted Norwegian salmon and slow cooked lamb saddle.

My search for the perfect strawberry dessert was actually part of some salacious research into Vietnamese twists on food aphrodisiacs. Catch my article in Oi Vietnam by clicking on the image below. 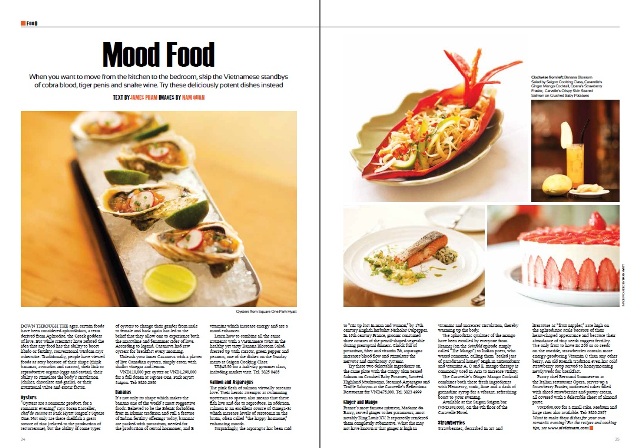 What’s your all-time favorite food crave and what ridiculous lengths have you gone to to get your fix?