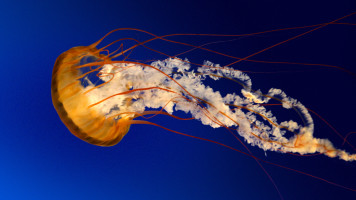 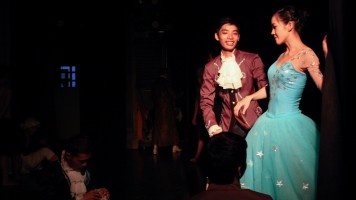 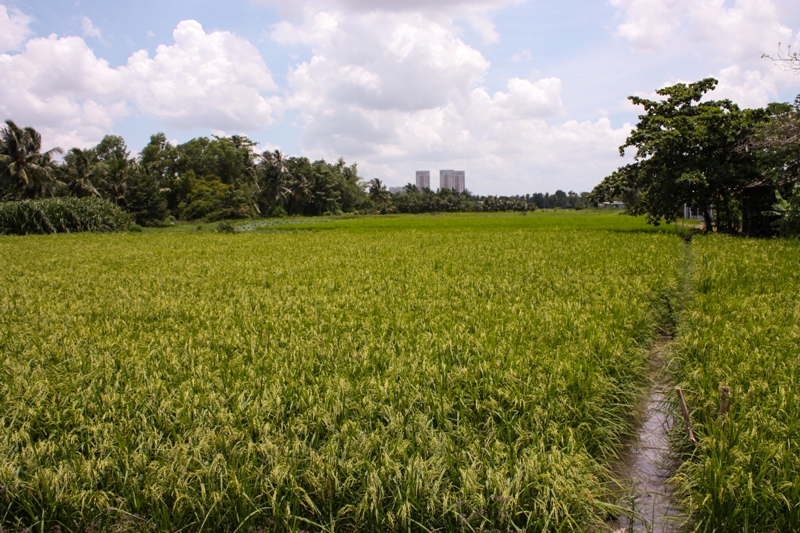 Three times a week I make the five minute drive over a singular, newly constructed bridge on the way to my tennis club. The wide four-laned road lined with restaurants (including duck rice porridge for which Thanh Da is known), apartment buildings and one lonely KFC quickly narrows. Small one-story houses line the road. Shops sport simple bamboo poles, hooks and floats. I am on Thanh Da, a 1,200 acre island smack in the middle of Ho Chi Minh City.

A little down the road and I come to a Cao Dai temple, one of 27 in the city. To the uninitiated, it’s an explosion of color, an altar to everything gaudy. 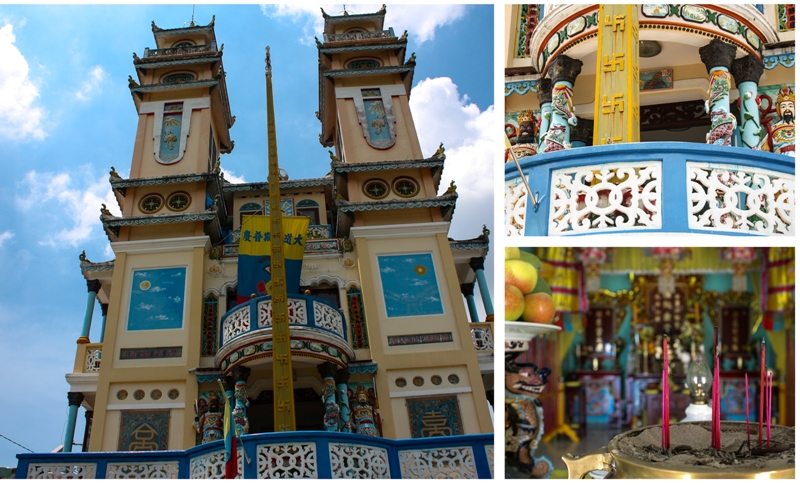 The Cao Dai Holy See in Tay Ninh (two hours northwest of Saigon), the center of Vietnam’s largest homegrown religion which combines the teachings of Jesus, Confucius and Buddha, all presided over by the Divine Eye. was famously described by Graham Green in The Quiet American.

“Christ and Buddha looking down from the roof of a cathedral on a Walt Disney Fantasia of the East, dragons and snakes in Technicolor”. 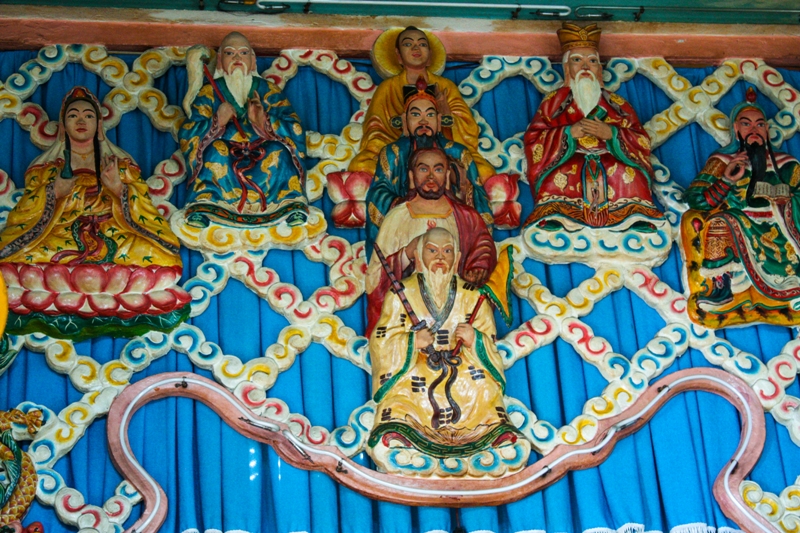 I see for myself that his description is as vivid as the reality. I head up a winding staircase to the second floor (there are separate staircases for men and women) where I find a room dedicated to God the Father, whereas another room pays homage to the Mother Buddha in an adjoining building. I’ve come on a religious holy day and some devout women are out in front preparing vegetarian meals for the poor.

I talk to Hong, the branch’s treasurer, and she tells me that the goal of the devout is to follow a vegetarian diet at least 10 days out of the month. Those that do, are considered especially holy, worthy of a religious burial if they die.

“Nine days a month is not enough,” she tells me sternly. 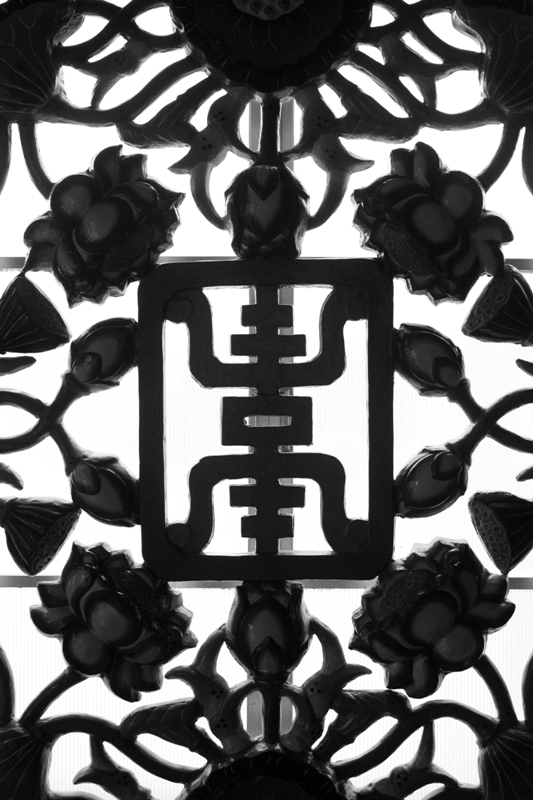 As with almost every religious conversation I’ve had with Buddhists or adherents of Cao Dai, the conversation quickly turns unintelligible to me in a flurry of technical jargon and words specific to their religion. In essence, I gather that is an amalgam of some of the world’s largest religions, all based on the belief of one God.

While I don’t think I found personal enlightenment here, I appreciate being welcomed to wander around the premises, trying to wrap my head around this unusual syncretic brand of religion. 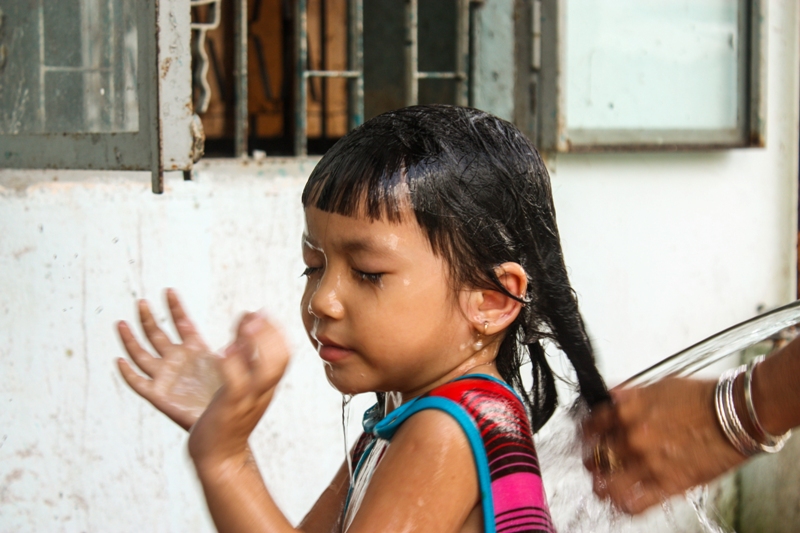 Farther down the main road, with the river to my left, I take a random right turn down one of the many unmarked paths and am teleported into a pastoral scene that could be somewhere deep in the Mekong Delta or in Vietnam’s Central Highlands. A mother is bathing her daughter with a hose in a metal basin. A family is preparing a meal on their barge that has made its way inland via canals branching off from the Saigon River which snakes its way through the city. A man is using his lunch hour to do a bit of fishing in one of the many every-shade-of-green rice fields that checker the island. 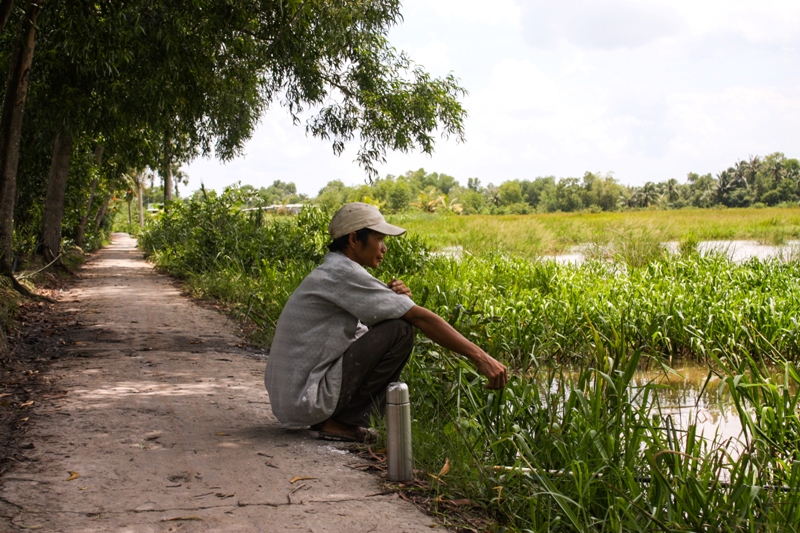 With the amount of water in the form of ponds, lakes and rivers, it shouldn’t come as a surprise that fishing is Thanh Da’s most popular pastime. On both sides of the main road, man-made ponds and pools beckon anglers looking to catch butterfish, talapia and carp. If shrimp is more to your liking, there are 1m deep pools, surrounded by plastic chairs with poles at the ready. Prices vary but average around VND100,000 (USD 5) per hour for shrimp and VND20,000 to 100,000 for fish depending on how well stocked the pond is. Lucky anglers can keep whatever they catch, to be brought home or cooked to order on site. 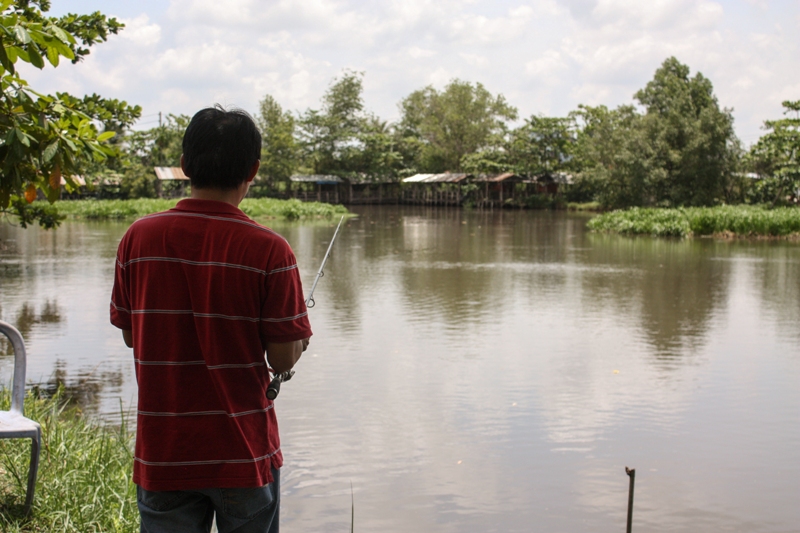 I stumble upon a large fishing pond towards the center of the island. It’s 4 acres of pond ringed by thatched huts and hammocks. On a Monday afternoon, Minh, 58, is one of only four fishermen with positions staked out around the enormous pond. Patient wives sit under the cover of shade. One is practicing her Chinese calligraphy, resigned to the long hours of being married to a hobby fisherman. Deliveryman by morning, Minh spends seven days out of seven fishing in various spots around the city.

I watch as he makes a ball out of a white, glue-like substance, adding it to a clump of three hooks on his leader.

“This is my secret recipe. It’s rice that has gone bad, but mixed with Knorr seasoning, Laughing Cow cheese and coconut powder. These fish are picky eaters and you’d think this would smell bad, but after it’s all mixed up, it actually smells pretty good!” 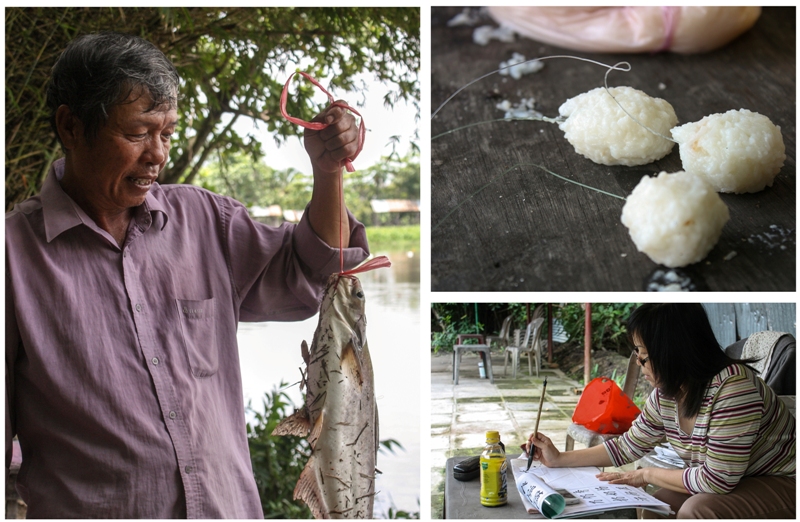 Minh has a couple dozen variations on his recipe depending on the fish he’s after and whether he’s fishing in still or moving water. He postulates that because pond owners typically feed their fish leftover rice and pho gathered from restaurants around the city, they’ve grown accustomed to the taste of rotting rice.

[A few weeks later, I gather some friends to come back for a lazy afternoon of fishing. The night before, I went to the store to pick up all of Minh’s ingredients, thinking I’d laugh and laugh as I used my super-secret fish bait surprise to haul fish after fish in while my hapless friends dangled tired worms to no avail.

If only it were that easy. Alas, the only success to be had that afternoon was in getting a good hand of cards, as no fish were biting, oblivious and impervious to my Laughing Cow concoction.] 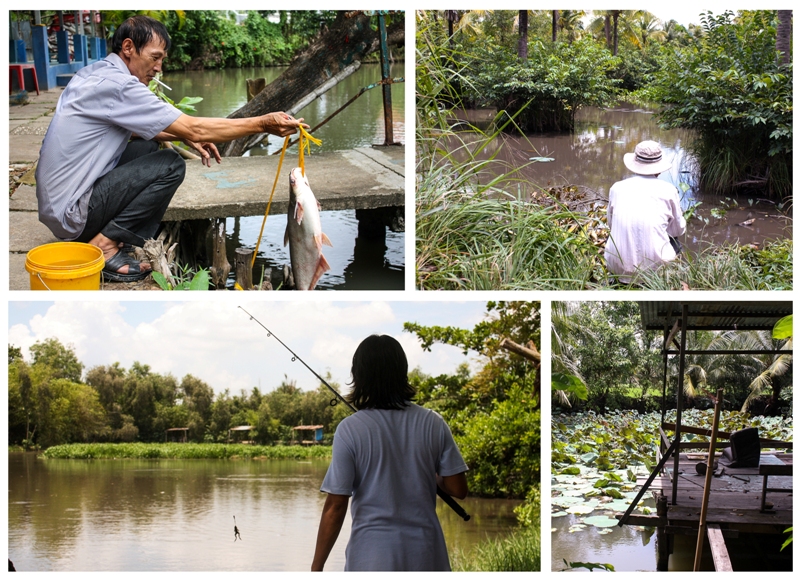 As we talk, Minh suddenly hooks a 2kg catfish. I ask him if he’ll have it for dinner and he visibly grimaces.

“I am so sick of eating fish. My fridge is full of them. Just looking at it, I feel like I’m going to turn into a catfish.”

But he can’t help himself. His scaly nemeses are at once his captors and saviors.

Instead, he sells whatever he catches to his neighbors, to lottery ticket sellers and whoever else wanders past his house. 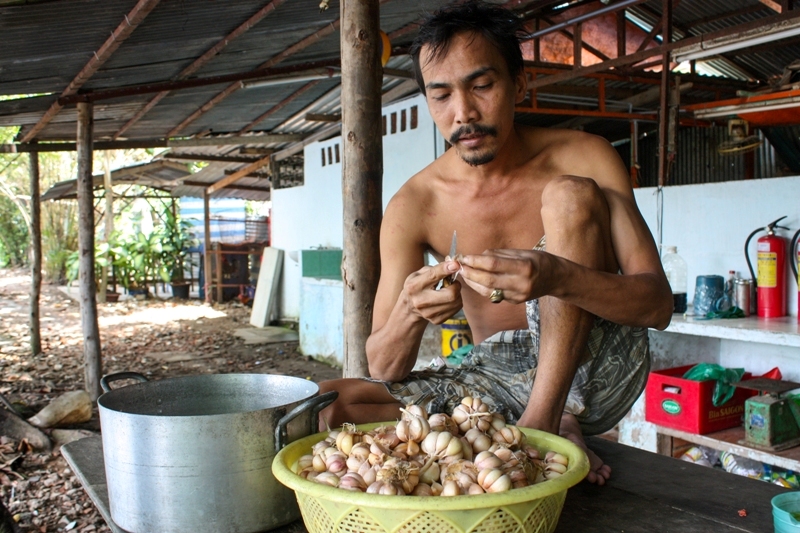 Who knows how much longer this idyllic slice of country life right in the middle of the city will last. Every so often, flashy plans of a multi-billion dollar supercity surface, threatening to replace the rice paddies and fishing ponds with high-rise condos, universities, exhibition spaces and entertainment facilities. Locals wonder whether three more bridges connecting Thanh Da to the rest of the city will ever materialize. What now just looks like a solid green blob on Google maps may soon be concrete and steel. 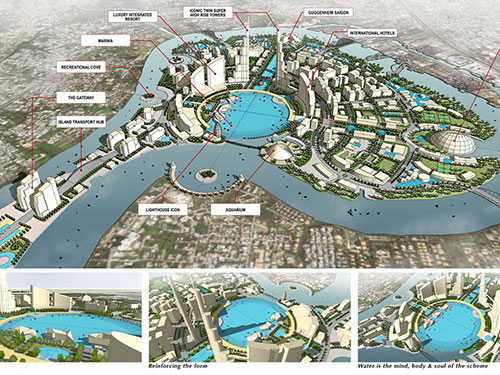 Hanh, the driver by morning, rice farmer / fish breeder / fruit tree tender by afternoon I talked to in Part 1 of this article hopes that day never comes. 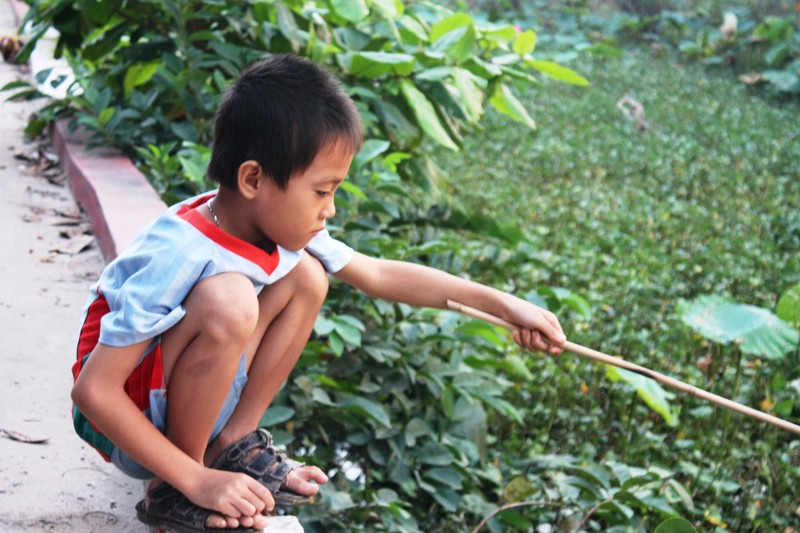 Getting there: Thanh Da’s extensive network of small, flat paved paths with very little traffic makes it an ideal area to explore by bicycle. You’ll more likely be dodging pigs as you are cars. Actually, cars can only go so far into the interior, before the roads narrow, making the area extremely bicycle- or motorbike-friendly. Helpful locals can always point you back to the main road.

What about you? Where’s your favorite place for some quiet amidst the bustle of city life?

To read my article on Thanh Da in Oi Vietnam magazine, click on the image below. 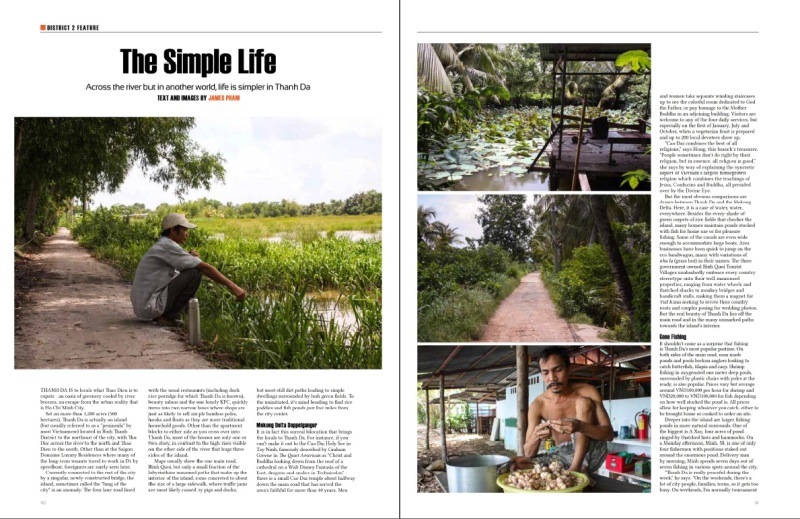