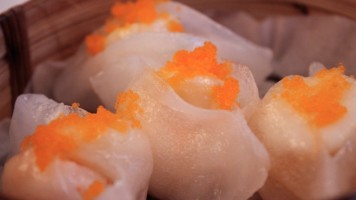 Dim Sum and Then Some 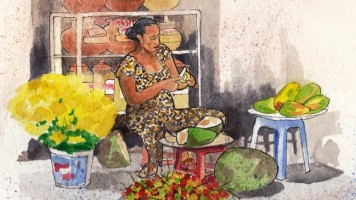 I Promise To Always Look Up 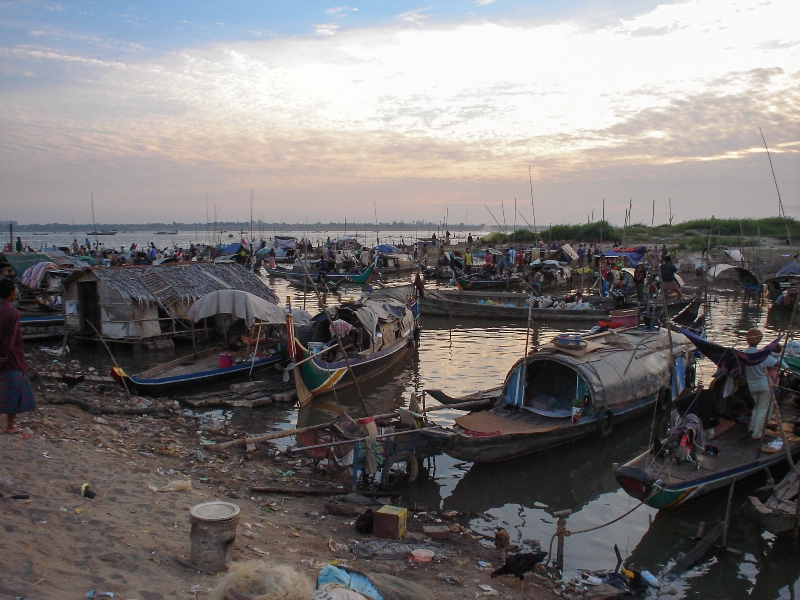 I’m not sure whether it’s a byproduct of my “Field Marshal” personality where there’s “not much room for error” and where “feelings are a weakness”. Or perhaps it’s simply been honed (or blunted?) by 11 years of seeing daily poverty in Asia.

My first visceral reaction to the divide between the haves and have-nots came rather innocuously. I had just moved to Phnom Penh and was walking home from the Western supermarket, happily licking an ice cream cone on a devilishly hot afternoon. I could sense their stares as they tracked me walking by more than really seeing them, a row of dirty-faced children who hung around the parking area asking for loose change. 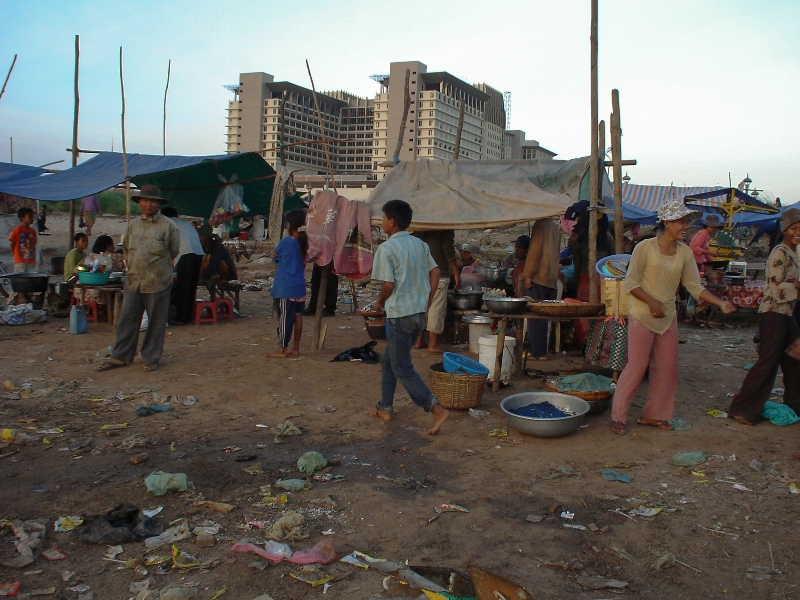 I explored the city more over the years, my volunteer work taking me to some of the poorest areas. Sometimes it was a fishing village on the banks of the Tonle Sap River with their makeshift tarpaulin tents, right in the heart of Phnom Penh, a luxury casino and hotel providing the jarring backdrop. 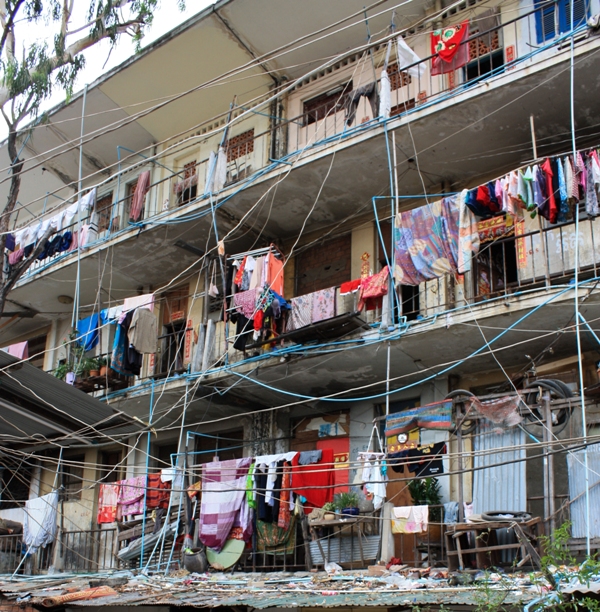 Or a tangled mess of pipes and wires in front of a decrepit apartment building. 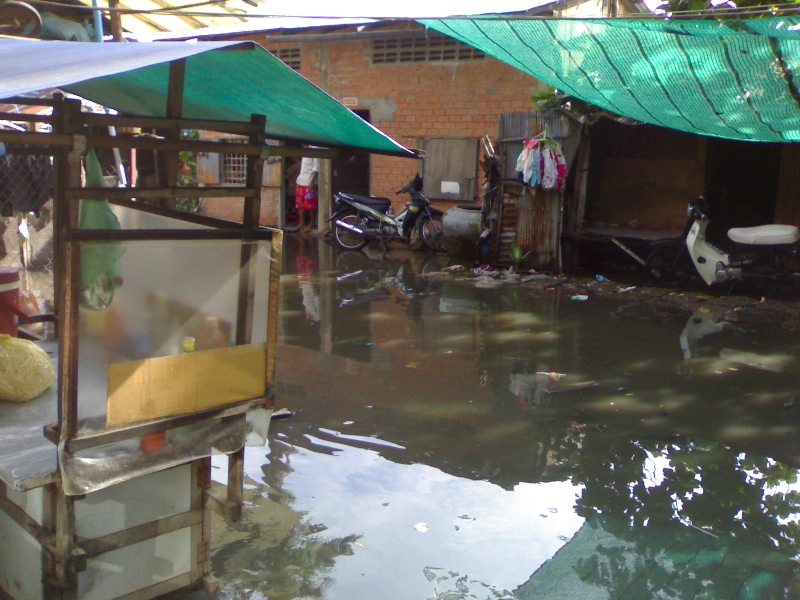 Or terribly small one-room rentals that flooded with every heavy rain, the residents of which resignedly mopped up smelly water and cloying mud with nary a complaint. 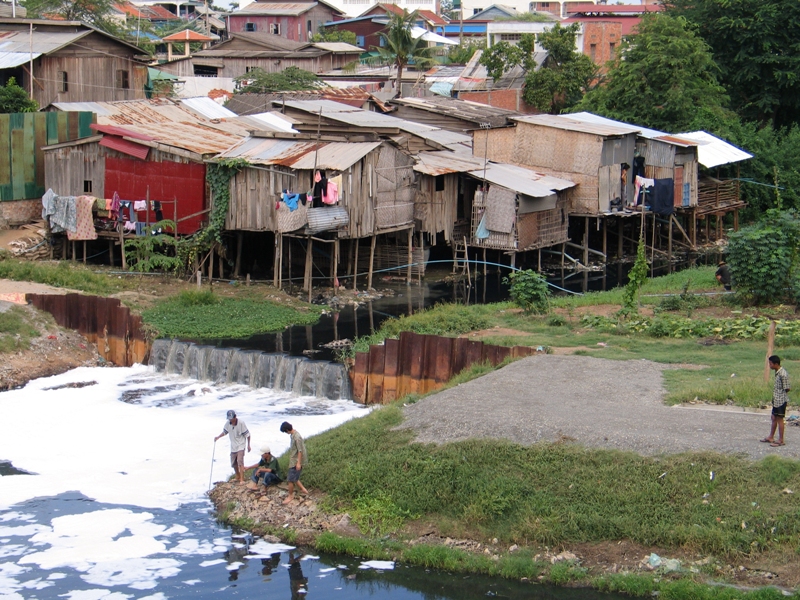 One of the worst places I saw was this community built over a sewage ditch. Some houses were literally over the black water which you could see through the slats of the floor. I felt nauseated for the first 30 minutes after which I was horrified to realize that the smell had gone away. It took less than an hour to become inured to this place. What must a lifetime do?

In Cambodia, I worked with dozens of NGOs, funneling hundreds of millions of aid dollars into the country every year. There were NGOs for street kids, disadvantaged mothers, trafficked women, mine victims, and the list goes on. I’ve personally witnessed some amazing success stories, from teaching one young boy from the Sunrise Children’s Orphanage his first few words of English, to being there when he was accepted into an Australian university almost ten years later. There was also a deaf girl who blossomed from a shy youngster only able to communicate with her parents through home signing to a confident young woman connecting with the world around her thanks to Krousar Thmey and their efforts to not only teach Khmer sign language to students, but incredibly also creating it when none existed before.

While I applaud the generosity behind these missions, I’ve also seen enough to question how effective some of them truly are. I’ve hobnobbed with expats earning very cushy salaries, only in the country for a few months, ostensibly putting systems in place to train up local Cambodians to take over. Statistics show that Cambodia, as a country, receives more money in aid per capita than any other country in Asia. Not that there aren’t poor people aplenty in Cambodia. I’ve sat in restaurants only to be shocked when glue-sniffing teens pawed around a basin of dirty dishes, scavenging scraps of food, gnawing bones that had already been gnawed. 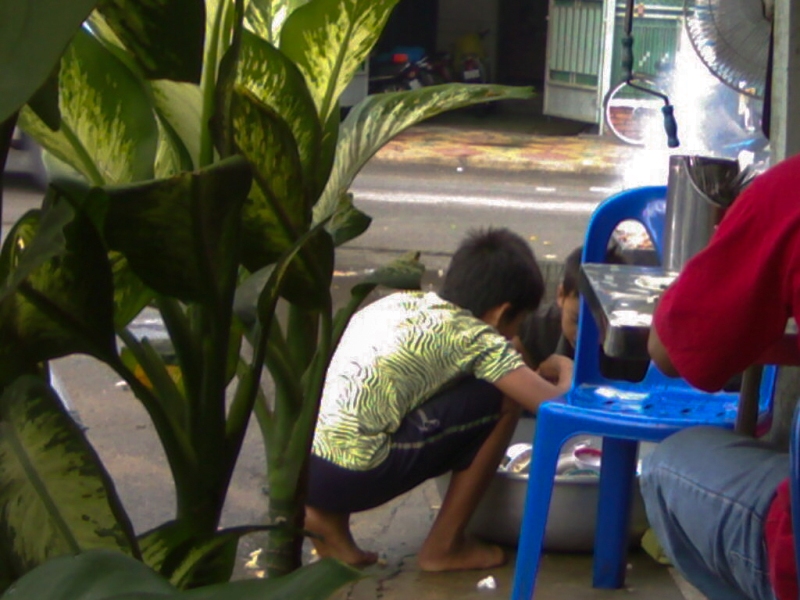 In a country with no social support to speak of, doing whatever it takes to earn money is the norm. The more entrepreneurial youths buy a kit of brown and black shoe polish and a brush, offering shoe shines for a quarter. Unfortunately, no one has really taught them the basics of salesmanship, as they usually approach with nary a smile or a hello, instead just pointing to your shoes or sometimes uttering a single grunt. 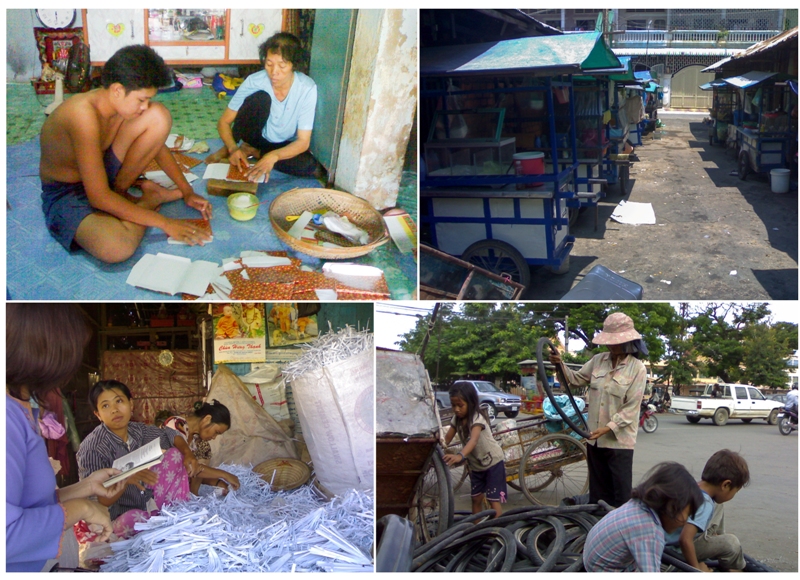 I’ve also seen menial jobs that I didn’t know were still performed by human hands. Like gluing envelopes together or sorting out shredded paper for mere cents a day. The streets of Phnom Penh ring morning and night with calls of “ep chai”, the term for buying recyclables for resale. Food carts litter the back alleyways, putting together the cheapest of ingredients to make a quick meal. Their entrepreneurial spirit in the face of mind-numbing work, earning less in one day than most of us might spend for a bottled water in the West is laudable.

Others choose a less noble occupation. Young mothers with dirty-faced babies hang out at the Western-style grocery stores or the gas stations, hands outstretched for a bit of change. Older people shuffle the streets with hollow eyes, backs hunched over almost 90 degrees, looking for a handout. 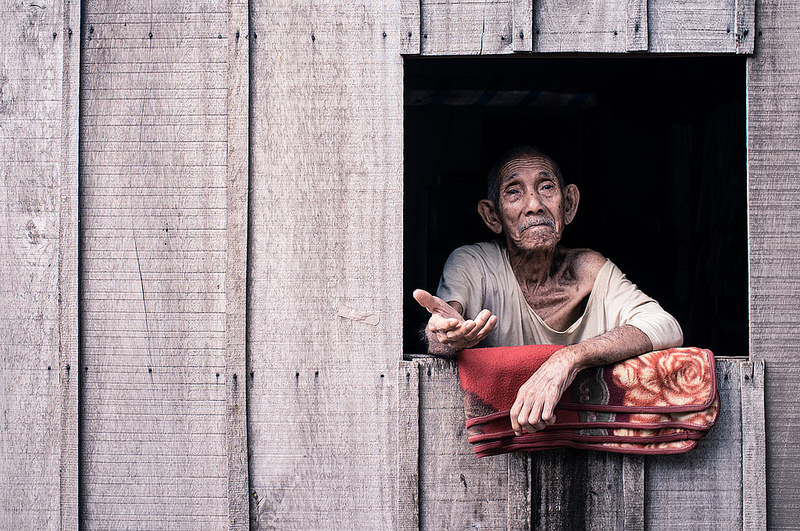 I’ve read enough literature arguing against giving to the supposedly needy, fueling a vicious cycle of parents keeping children home from school where they only cost the family precious resources needed for books and uniforms instead of generating income, however meager, or adult children forcing elderly parents onto the streets to beg. I’ve also see grown men, perhaps missing an arm, using their other limb to beg while puffing away on a cigarette. Was I justified at simply shaking my head, convinced that they’d be able to find some kind of work if only they tried? Or that they’d spend my donation on their next packet of cigarettes or bag of homemade alcohol? Were they less deserving than the horribly disfigured woman I saw every time I went to the market, with her same basket of tired postcards, but always with a ready smile for everyone, whether they bought something from her or not?

We live in an unjust world which forces me to make a split-second decision every time I’m faced with poverty. The kind of poverty that actually has a face.

My reaction often depended on my mood. Perhaps it had been a particularly hard day at work. Or maybe the weather was stifling hot, the air hitting your face like you just opened an oven door. Maybe it was the 10th person begging for money in the last 10 minutes while I was trying to have a meal, not an uncommon thing to happen.

I sensed someone standing in front of me. The dirty, unkempt toe nails, the calloused feet and cheap plastic shoes signalling another faceless soul in a long line of unfortunate souls. I felt myself sigh, shaking my head without even looking up from my meal.

Almost immediately, I felt it. 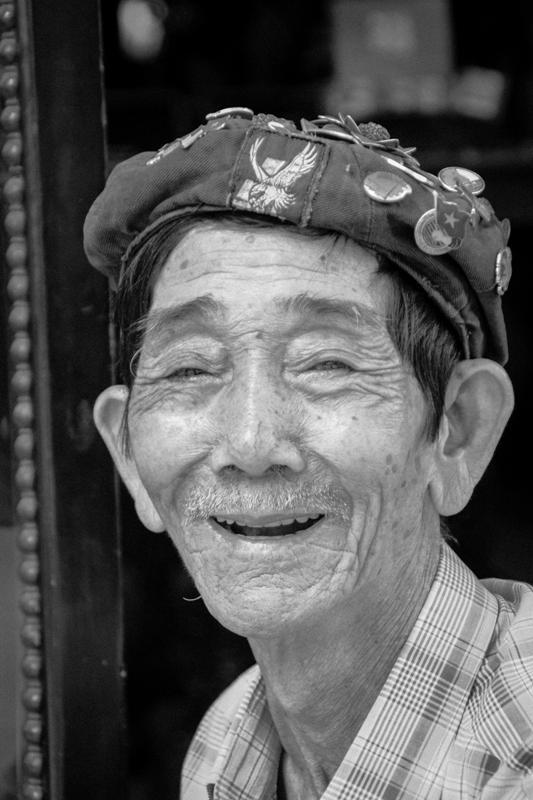 Shame on me for not at least looking up. For not at least acknowledging another human, no matter how deserving (or not). For not having the courage to look into the eyes of a person who may have been hungry or suffering or simply having a bad day that was immeasurably worse than my own.

Yes, it’s nearly impossible to make a split second decision of whether someone is truly needy or just looking for an easy payday. But from that moment, I vowed to myself that never again would I ignore a beggar. At the very least, I’d look them in the eye and offer something, even a smile, if nothing else.

In Vietnam it’s easier. While there’s no government assistance other than for war vets, local communities often pitch in to help the elderly and needy. There is significantly less begging, with most choosing to sell lottery tickets for a small commission instead. While I never buy the tickets because I’m morally opposed to gambling, I sometimes buy older sellers a cup of sugarcane juice. Another old woman’s face lit up when I offered to buy her the same lunch I was having, her profuse thank you’s the best reward. Additionally, for my own mental well-being, I’m also involved in providing volunteer education which helps people overcome unhealthy habits such as smoking, gambling and drug abuse. Does it feel like it’s an unworthy drop of water in the ocean? Most definitely. But it’s my way of fulfilling my promise to always look up.

For a recent article, I sat down to interview a humble street seller who’s been at the same spot for 40 years on Saigon’s poshest shopping street, someone I would normally walk by without paying much attention. Of course, my conversation with him sitting on the marble steps of a ritzy boutique as he spread his coins and stamps on the pavement, proved that behind every face, there’s a story worth hearing. For the full text of the article “The Faces of Dong Khoi” in Vietnam Pathfinder, please click on the image below. 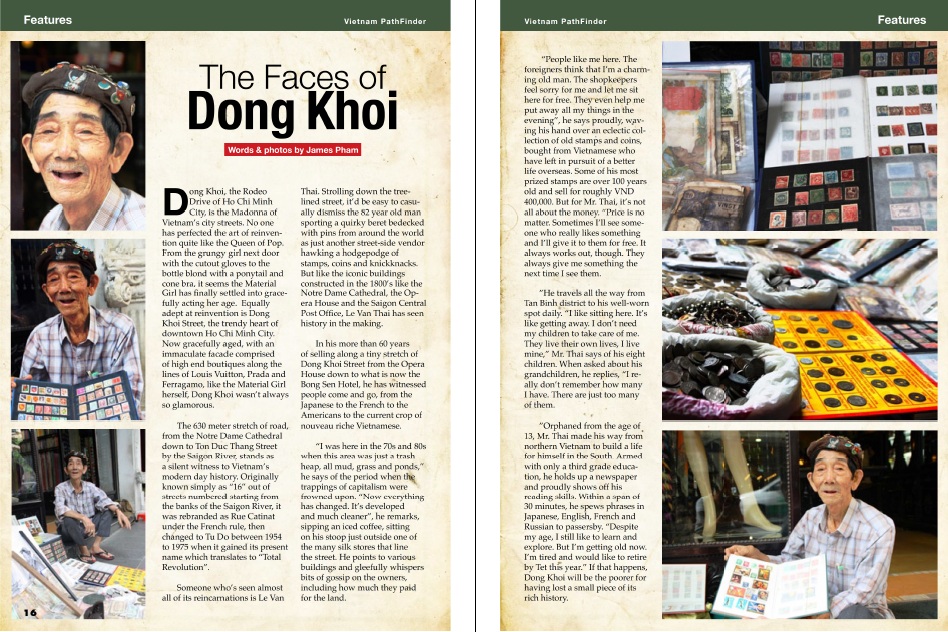 What about you? How do you deal with begging whether it’s in your hometown or while traveling?

20 thoughts on “I Promise To Always Look Up”