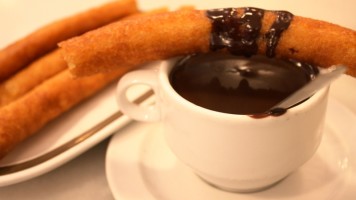 Prague has always been on my bucket list of great cities to visit. Not that I actually knew anything about Prague, mind you, but in my head were visions of Old World castles peeking out from the fog along the Vltava River. Right or wrong, I had made a mental czechlist that included castles, stunning scenery, sophisticated cityscapes and interesting food. I present you, my Prague Czechlist.

Castles? Czech! Towering high over the city of Prague is the Prague Castle, the largest coherent castle complex in the world according to the Guinness Book of World Records (nearly 70,000 m² total area including palaces and churches). As you draw steadily closer, the castle is simply massive, and since it’s located on a hill, it’s visible from almost everywhere in Prague. Unfortunately, the week I was there, the castle itself was closed for technical reasons, so I had to settle for a walk through the well-tended gardens, past

the dainty Summer Palace and the regal St. Vitus Cathedral with its towering double steeples and pretty stained glass windows. Other visitors I talked to felt that the exterior was much more memorable than the rather empty interior.

The exact opposite was true of my favorite castle, the Cesky Krumlov Castle, located about 3 hours from Prague. The 750 year old castle was remarkable in that you could clearly see the progression of styles from room to room, from the cold, geometric Gothic period to the refined, formal Renaissance period to the frilly, overly ornate Baroque / Rococo periods. What I loved most were the richly restored, centuries-old frescoes that embellished so many of the castle walls. The pinnacle was the Masquerade Hall with every wall space

spectacularly illustrated, often with trompe l’oeil effect, to create the feeling of lords and ladies, monkies and dogs, royalty and peasantry craning for a look at the festivities inside. It was so visually stunning, I would’ve been happy to spend hours taking it all in. What I wouldn’t give to attend a performance held there!

Classical music? Czech! It was one of those perfect travel moments. When everything comes together and there’s no place else you’d rather be. For me, that moment came in the tiny 900 year old St. Martin In The Wall Church, listening to a talented string quartet playing Dvorak and Smetana, the most beloved of Czech composers. The feeling was hard to capture, the way just a few pulls of the bow was able to make my spirits soar, the rich melodies reverberating off the Gothic stone, washing over me. Old music in an old place. Excellent.

Never too much of a good thing, I also went to a performance by a 10 piece string orchestra along with a harpsichordist in the gorgeous 20th century Art Nouveau Municipal House, right next to the Powder Gate, a hulking fragment of Prague’s Old Town fortifications dating from the Gothic period. I loved the fact that on any given day, there was a wide choice of music, opera and theater in Prague’s many beautiful venues.

Stunning food? Czech! While Czech food, like much Central European food, tends to be heavy on meat and potatoes and dumplings, I thoroughly enjoyed the cuisine on offer. My meals ranged from rustic (pork chops and baked potato cooked over an open fire) to the guilty (but cheap, filling and surprisingly authentic) Chinese food (thanks to the strangely large community of Vietnamese and Chinese in Prague!) to the sublime (Venison Wellington with chestnut puree and honey shallots) enjoyed in the Pachtuv Palace, now a hotel cum restaurant. Of course, there were the traditional Czech favorites: dough rolled on to a metal pole and grilled over charcoal with powdered sugar (apparently sugary dough is enjoyed all over the world!) and hot wine (think: liquid potpourri in a cup).

Striking cityscapes? Czech! Compared to many other European cities, Prague

escaped much of the WWII damage, allowing much of its stunning architecture to remain intact, everything from Art Nouveau to Baroque, Renaissance, Cubist, Gothic, Neo-Classical and ultra-modern. My hotel was smack on the dividing line between Old Town and New Town (but even “New” Town dates back to the 14th century). It was an absolute pleasure to wander the city’s uneven cobblestone paths, roaming the many sights packed tightly together, from the picturesque (but sedate) squares (Prague could learn a thing or two from Spain about entertaining the masses!), the old Jewish quarter and of course, Charles Bridge, spanning the Vltava River. Prague is deserving of its many monikers, “Golden City” and “City of 100 Spires”, to name a few.

For a real blast from the past, a day trip to Cesky Krumlov, almost at the Austrian border, is a must. There, average houses have been restored to their Medieval glory days. Frescoes transform even the most mundane buildings to works of art. I could have happily turned the day trip into an overnighter…

Travel tips: (1) With most of the main sights within 20 minutes of each other, Prague is very walkable. I took advantage of Sandeman’s free walking tours (as I did in Madrid) for an excellent orientation of the main neighborhoods. I would thoroughly recommend doing one of these on arrival to better decide which areas deserve more time on your own.

(2) I stayed at the great Ai Quattro Angeli apartments. For about the same price as as a  hotel room, I had my own spacious studio apartment with kitchen. After traipsing around the world for a month, it was great to be able to cook up a pot of comforting spag bol for when I didn’t feel like eating out. (3) Apparently, Cesky Krumlov is relatively easy to do on your own via bus/train and maybe a taxi.  It does make for a long day, though, as it’s about 2.5 to 3 hours from Prague. I went with a tour company and for a little over USD 100 (book online for 10% off), had everything covered, including a great meal in an atmospheric medieval pub and entrance to the Castle with a separate guided tour inside. I felt it represented decent value for not having to worry about logistics.  (4) The 3-course gourmet meal I described earlier (Venison soup with cream and mushroom dumplings, Venison Wellington and Red Wine Poached Pear with Cinnamon Ice Cream in one of Prague’s top-rated restaurants) would normally cost €30 ordering off the menu. However, I paid a ridiculous price (just under USD 20),

thanks to a Fall Food Festival I found online. It really pays to spend some time surfing for festivals and events as you may never know what you’re missing! With so much rich history, there is a glut of re-purposed beautiful buildings all around the city, so half the fun is choosing an activity with the added bonus of seeing the inside of a gorgeous space. (5) Prague has an excellent metro and an even better tram system (runs all day / night and was 100% on time). You can buy individual tickets or passes for 1 or more days. Most ticket locations are unmanned, so make sure you have change on you at all times, as ticket machines do not accept bills. Those coins will also come in handy as every bathroom I came across required payment (even in McDonald’s!)

6 thoughts on “My Prague Czechlist”