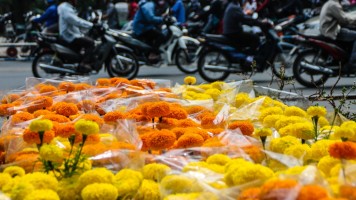 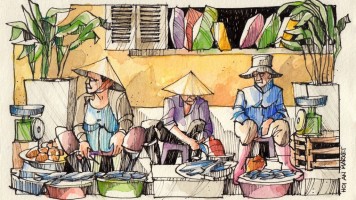 Nothing Hidden, Everything Sacred 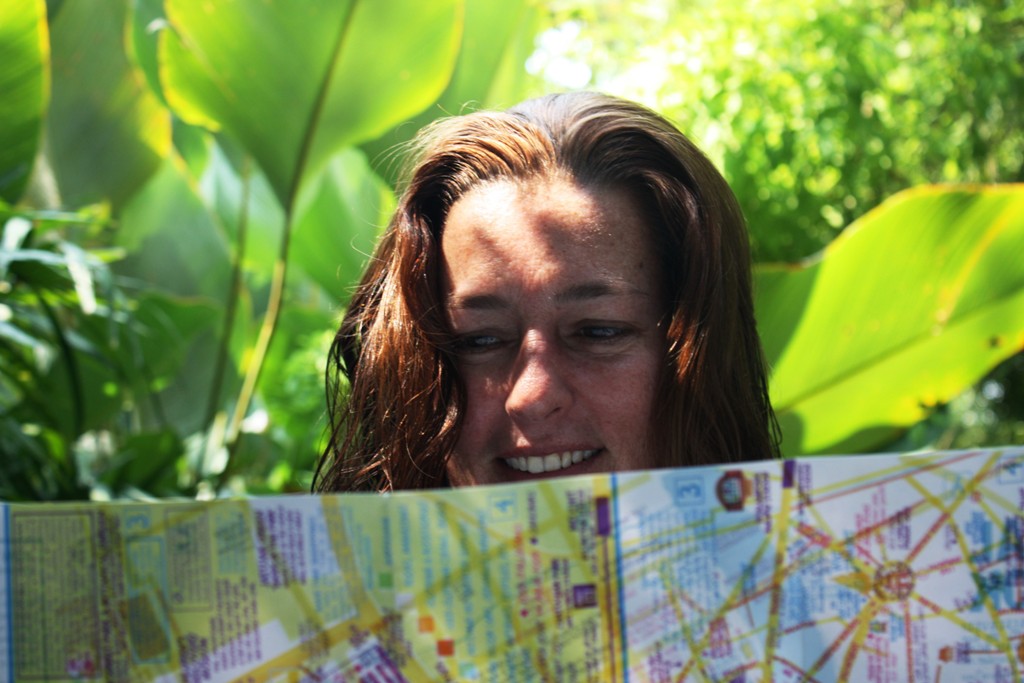 “I used to walk past this restaurant that was just disgusting. They had blackened rice cookers outside and dirty floors. No farang would ever go in there. But a friend took me and it was just fabulous. Everyone was there from the hi-so grandmother (Thai-English for “high society”), to a funeral group, to a grandson who just became a taxi driver and an older mamasan, who was heavily made up. The first time I ate there I got violently ill, probably from one bad garlic shrimp. But it was so good, the next day, I said, ‘We’re going back’. The place stayed open during the protests as a sign of faith, even when staff had to walk through the Black Shirt front lines. It’s now one of my favorite Chinese seafood places.”

So is a day in the life of Nima Chandler, daughter to Nancy Chandler, the founder of Nancy Chandler Maps, a series of highly detailed, hand drawn maps of Bangkok, Old Bangkok and Chiang Mai.

I love all things functional artsy, so when I came across an article on the Chandler women and their highly acclaimed maps, I knew I had to meet Nima. On a sunny afternoon in Bangkok, I found myself walking with Nima through hidden courtyards where wooden houses used to stand. “I used to play here as a kid,” Nima says of the spaces now occupied by steel and concrete skyscrapers. 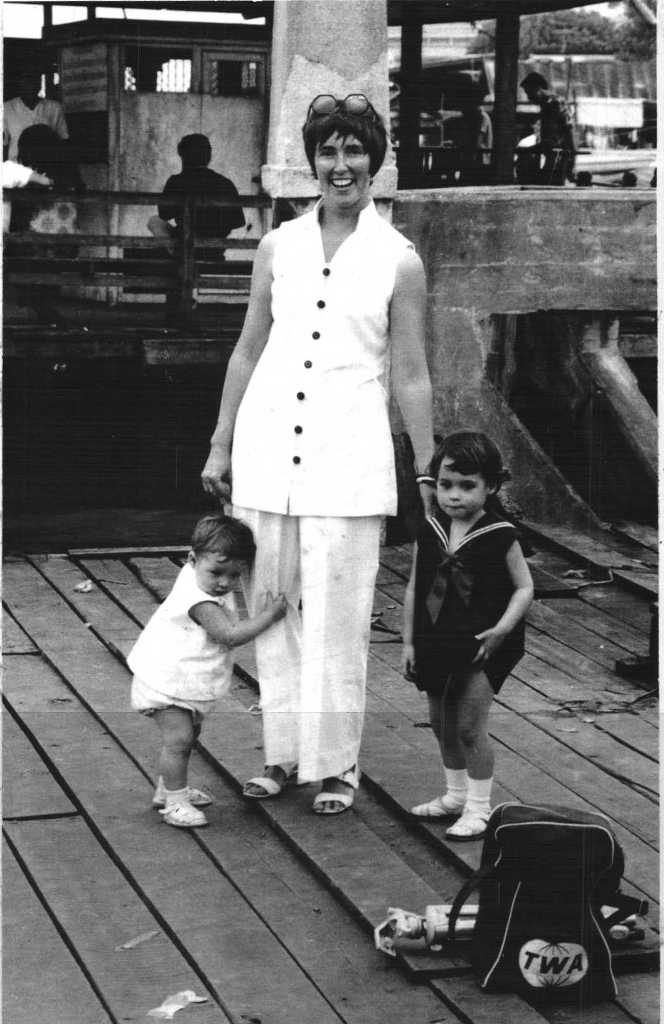 Nancy Chandler with Nima and her younger sister, c. 1974

Born in Nepal and raised in Bangkok, Nima knows the city like few people do. Nancy’s parents worked around Asia, landing in Bangkok in 1969. As we sit in Yummy Tummy, a colonial-era house now converted to a small restaurant with a serendipitous garden incongruous amongst the surrounding luxe high rise buildings, Nima tells me about her upbringing, traipsing around the world with artistic parents.

“Every Xmas card was handmade with silly commentary. My mother studied Art History in university but it wasn’t until they were in Nepal that she started doing art on the street, selling artwork to tourists and expats.”

In Bangkok, Nancy began to illustrate her new surroundings, including whimsical cards for fellow expatriates. The American Women’s Club of Thailand then asked Nancy to draw a one page map of the city showing where the markets were, but in doing the research, Nancy and her friends ended up completely lost, so she added landmarks to the map to help them remember where their cars were parked. “Bangkok in 1974 is nothing like it is today,” says Nima with a smile, as if today’s Bangkok isn’t one of the most chaotic cities in the world. 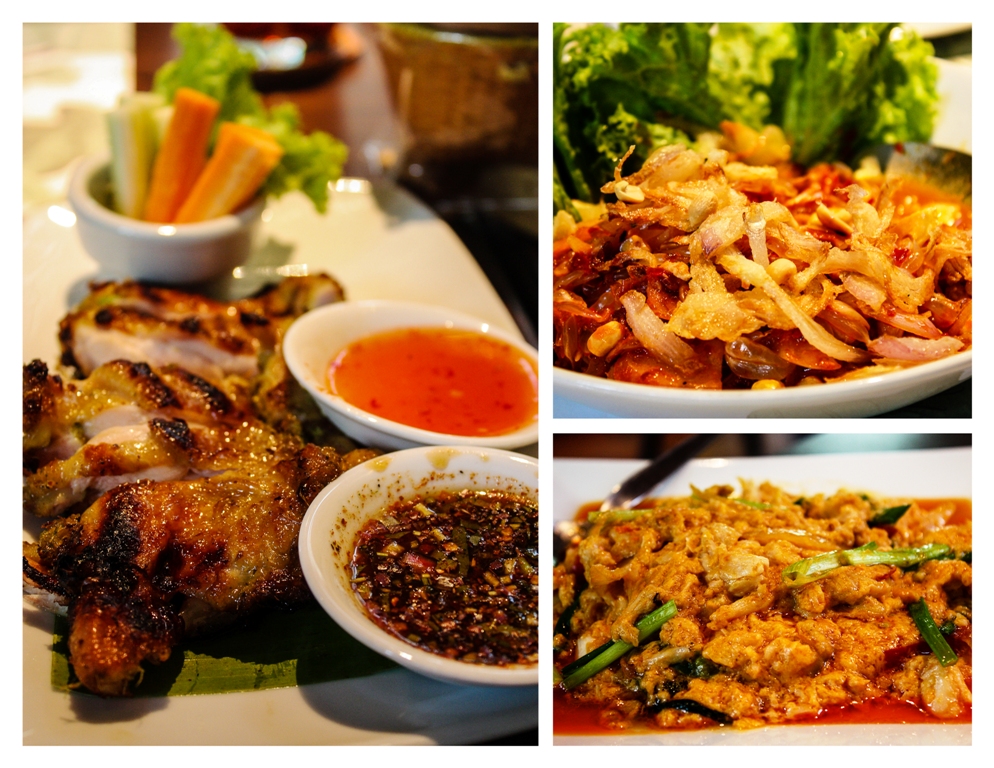 I take gluttonous bites of Kor Moo Yang (grilled pork with spicy nam jim jaew dipping sauce) and a crab meat and curry omelet as Nima tells me that after attending university in the US (“I couldn’t wait to get back to Thailand”) and five years of writing travel trade news, she one day found herself on a beach contemplating her next career move.

“Mother came down and asked if I would help her with the business (maps and greeting cards) while I was deciding what I wanted to do. She needed help in distributing the map. She was terrified at the idea of growing the business.” 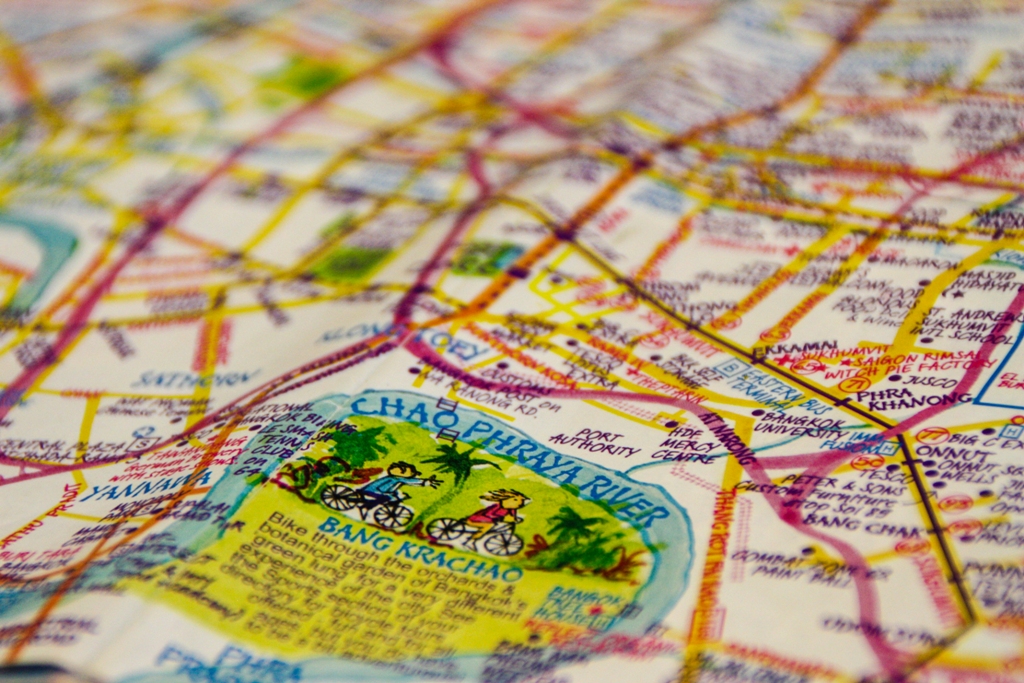 Seventeen years on, and Nancy Chandler Maps are the definitive local guides for people who want to get off the beaten path. Not only beautiful to look at, I love how detailed they are with notes that only a true insider could make. You won’t find listicles here. The maps are all about self-discovery.

“We’re not going to tell you what the Top 10 things are. But if you study the maps, you’ll find out what’s the Top 10 for you. It’s different for everyone. It’s like seeing a movie you’ve already seen but now with locals and seeing where they laugh. I saw The Adventures of Priscilla, Queen of the Desert with Thais and they couldn’t understand why you would be a transvestite and not look better than that!”

Nima now spends most of her time researching the good, the bad and the ugly of what Bangkok has to offer.

“It’s second nature to me now. I’m constantly looking. There are places launching all the time. Bangkok changes in a blink of an eye. I keep paper notes, electronic notes and notes on my phone of places I stumble across in between printed editions. It takes stamina to do the research, to withhold judgment when judgment needs to be withheld.” 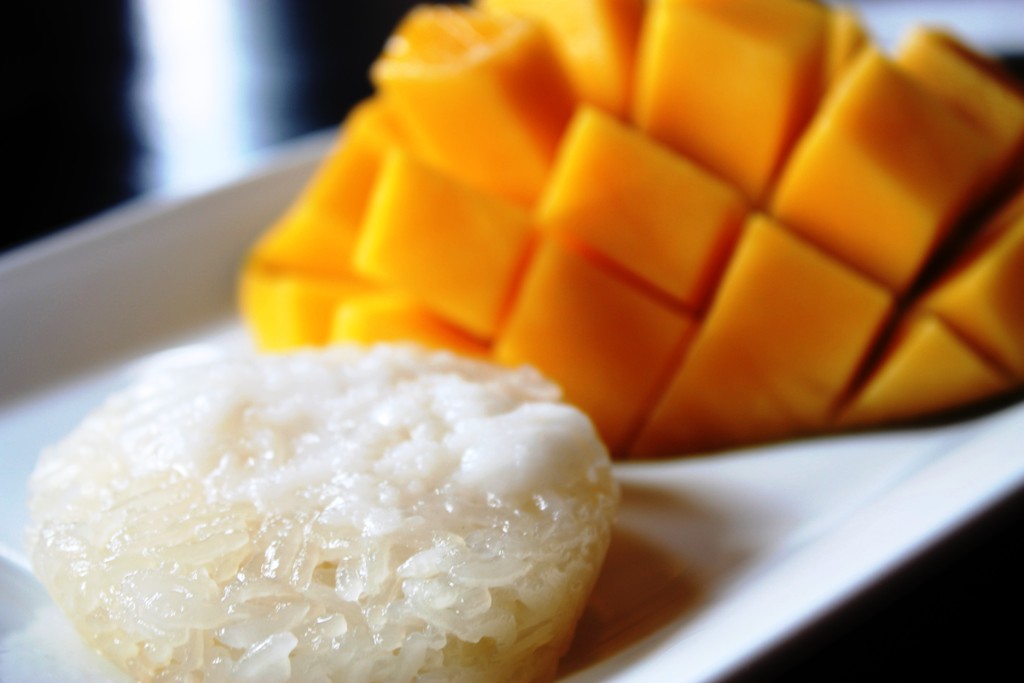 Another feature of the maps is the incredible online support they get. Travel blogs are great for getting an on-the-ground perspective of things to see and do, but they are rarely updated. Guidebooks may also go years between versions. Places close or move. New places open daily. Nima and her staff spend time between each ad-free edition of the maps (which include a pocket directory) calling everywhere to make sure they’re still open. Additionally, Nima posts updates to the Nancy Chandler Map’s Facebook page every couple of days and the website gets updated once a month. Knowing what I know now, I would never dream of planning a trip to Bangkok without checking the sites for the latest updates.

For Nima and Nancy, who’s now in her mid-70’s and semi-retired in San Francisco, the maps are truly a labor of love.

“My mother’s not a prolific artist; she’s not commercial. If I beg and plead, I can maybe get three or four [new illustrations] a year. But for her, it’s not financial. She just loves Bangkok.”

Over a Thai iced red tea, I tell Nima that I’m into quirky artsy stuff and she promptly recommends that I check out Baan Silapin. 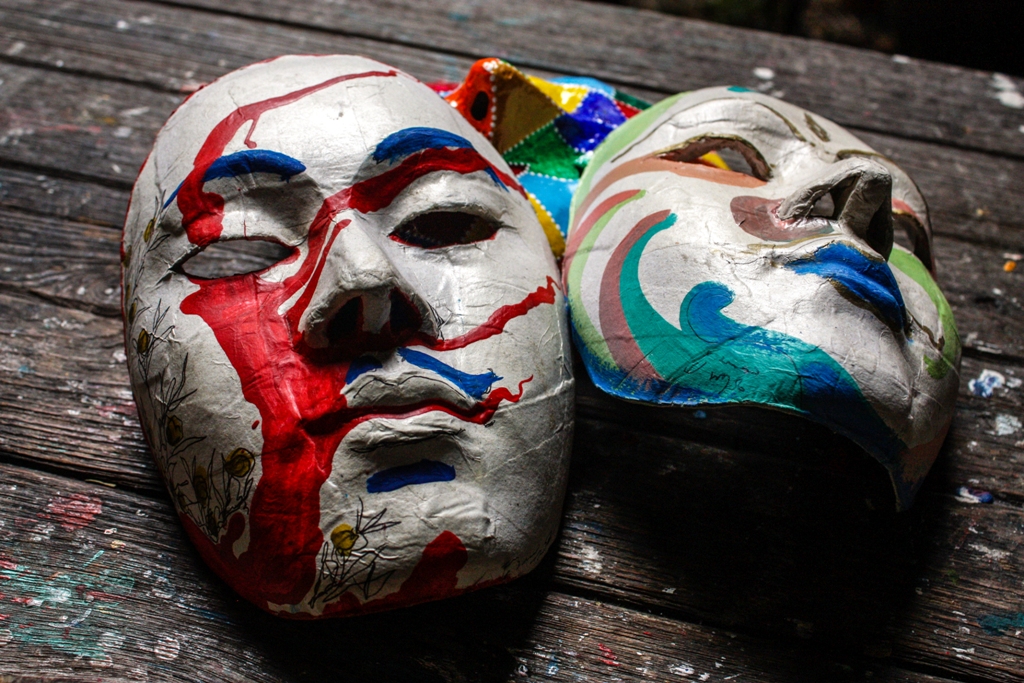 “It’s starting to show up on some of the river cruises, but not very many people know about it,” she says. “They don’t really cater to tourists there.” It’s true. The website isn’t working and when I call to make sure the classical Thai puppet performance is on, no one there can speak English. I ask my hotel to confirm and I’m off to Bangkok Yai, a neighborhood across the Chao Praya from Chinatown. The taxi needs to stop and ask for directions a couple of times, but eventually we make it there. 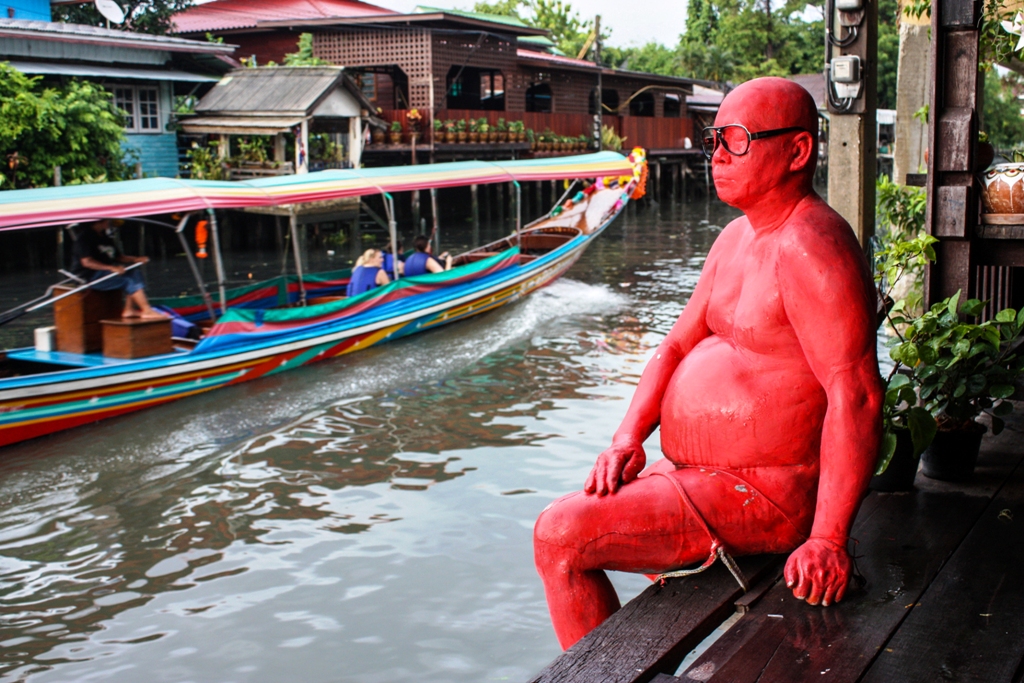 Baan Silapin (The Artist’s House) is a 200-year-old wooden house set in a neighborhood once inhabited mainly by merchants and senior government officials, built when King Taksin had his capital and palace on this side of the river (1767-1782). The house faces the Klong Bangkok Yai canal, an offshoot of the Chao Praya River. 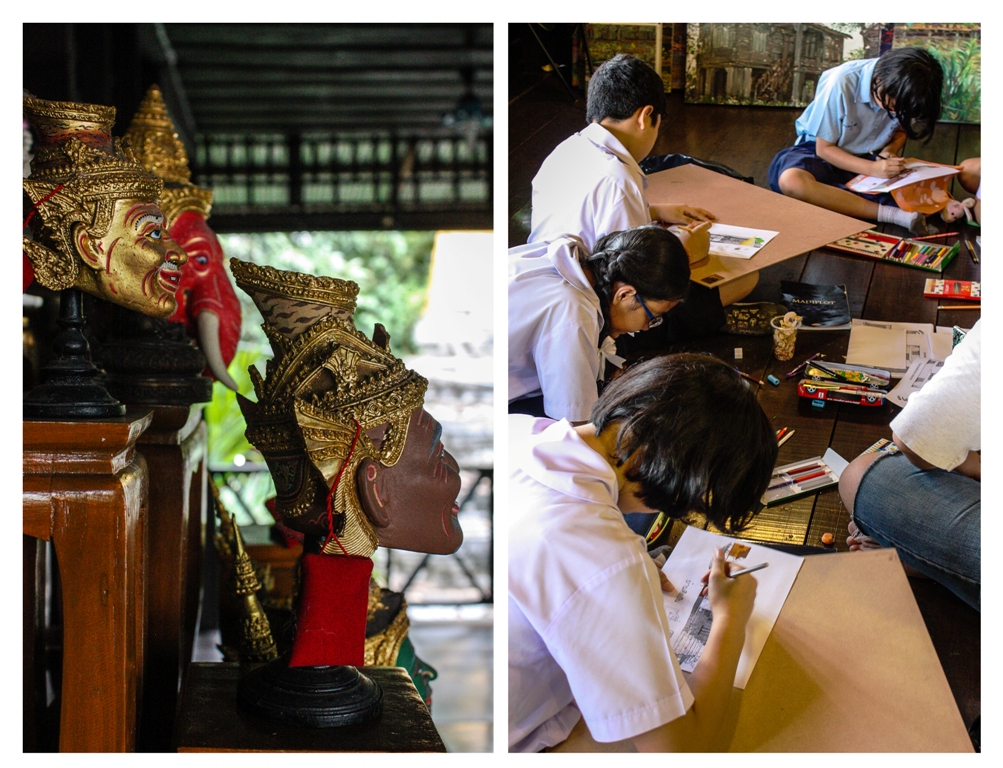 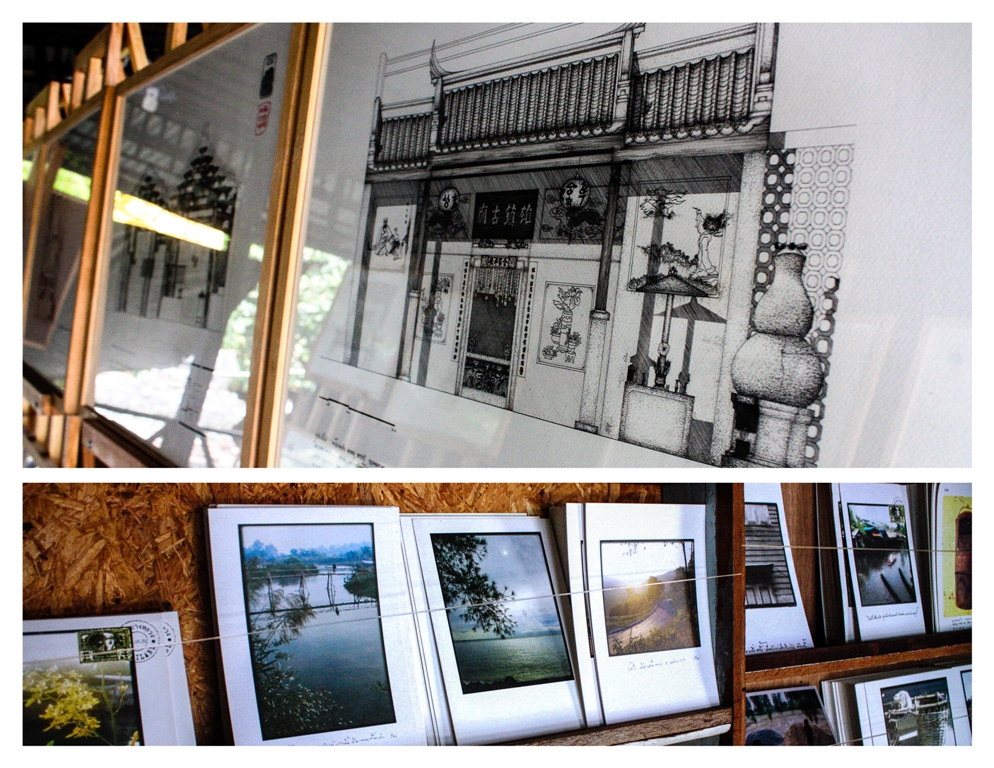 Baan Silapin is clearly a labor of love, rather than a commercial enterprise. Free classes on puppetry, woodcutting and Thai classical dancing take place here. In the gift shop, I pick up an armful of beautifully simple sketchbooks for USD 2 apiece. There are loads of inexpensive postcards and other artsy gifts, including colorful hand-painted masks. But what I’m really here for, along with a small crowd of tourists and Thai moms, kids in tow, is the puppet show. 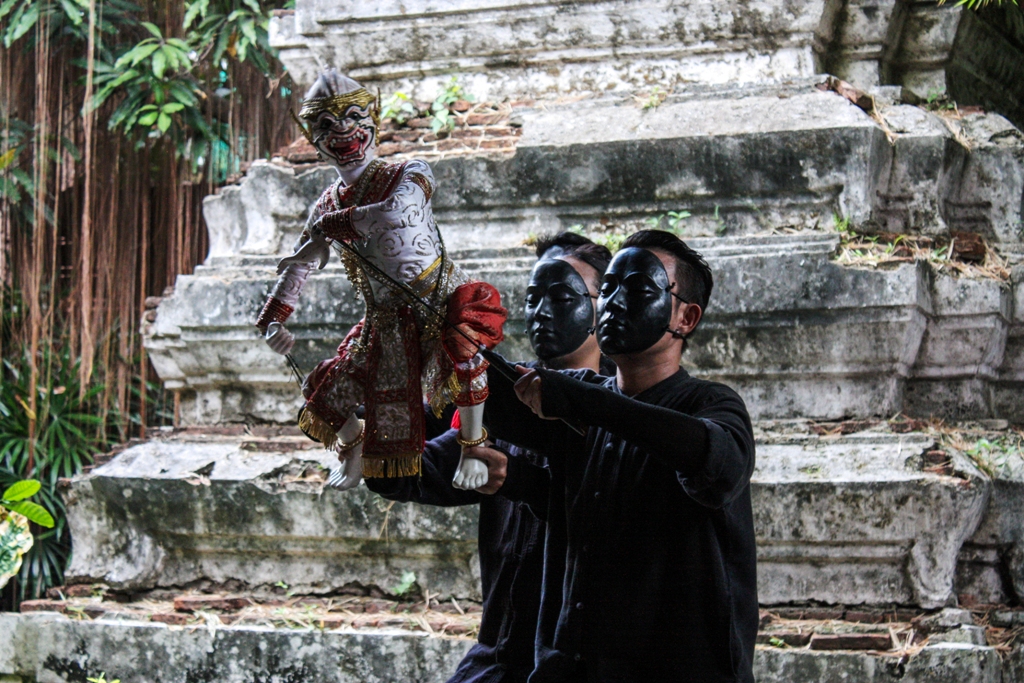 Unlike in most forms of puppetry, Thai puppeteers aren’t hidden behind screens. They’re actually an integral part of the show, being classically trained dancers themselves, moving in perfect unison with the puppets they control. The puppeteers, however, are clad in black, their faces obscured by expressionless black masks. 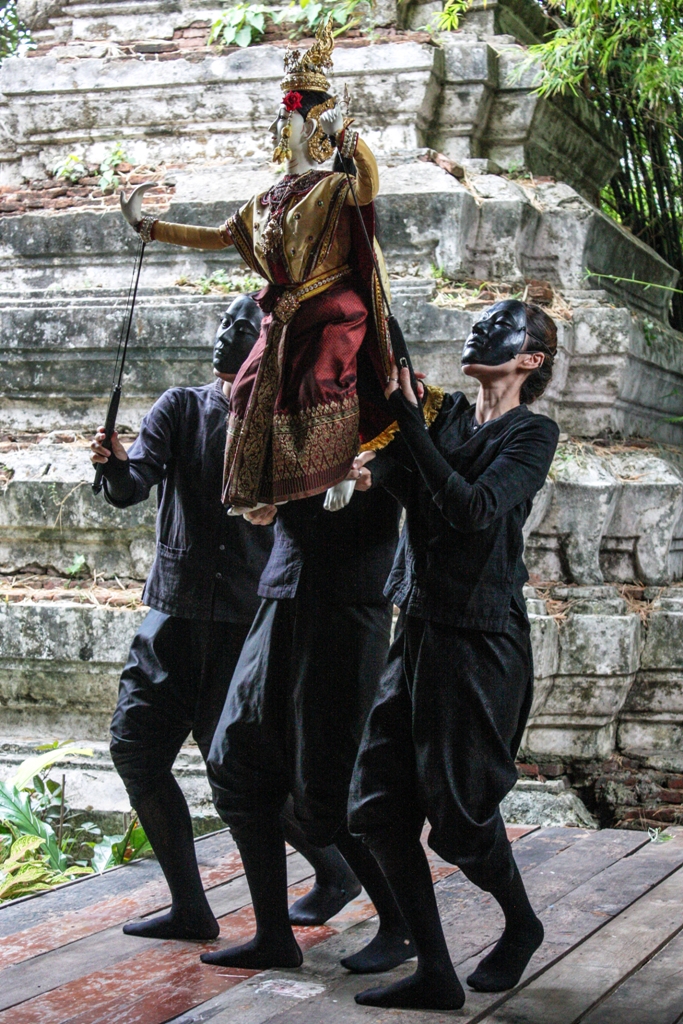 It takes three people to operate a single puppet, one each to control the right hand, the left hand and head, and the feet. There’s a brief introduction mainly in Thai, with a short smattering of English. Today’s performance tells of the monkey god Hanuman capturing Benyakai and involves a war, a fake corpse and some serious puppet smooching. 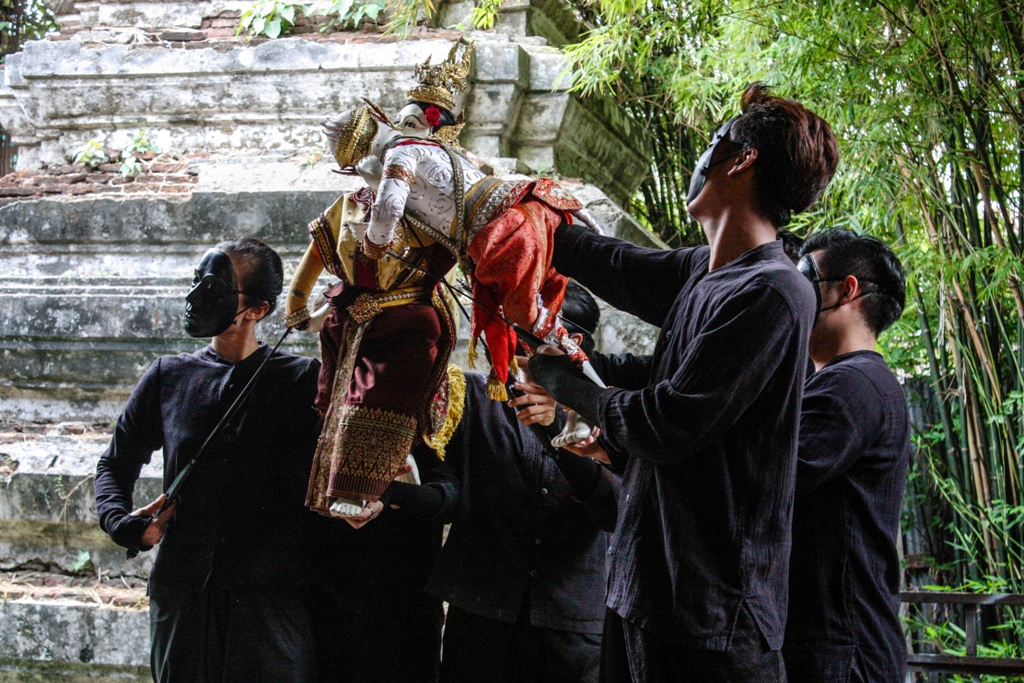 This is just the beginning but I’m loving Nima Chandler’s Bangkok. 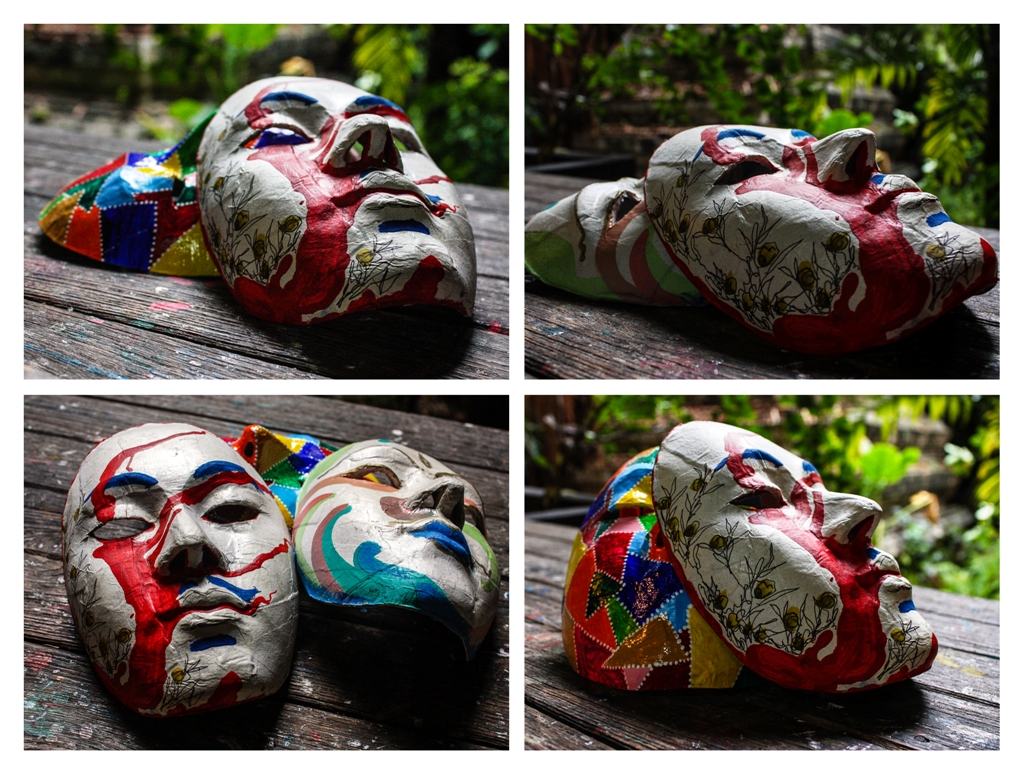 Puppet shows daily at 2pm except for Wednesdays and Sundays, but calling ahead (02-868-5279) to check the schedule is recommended. Baan Silapin can be accessed as part of a river tour. Alternatively, I took the skytrain to the nearest stop (Wongwian Yai) and then a taxi (about USD 3-4). Tell your driver to drop you off at Charan Sanitwong Soi 3 or Phetkasem Soi 20. Admission is free. 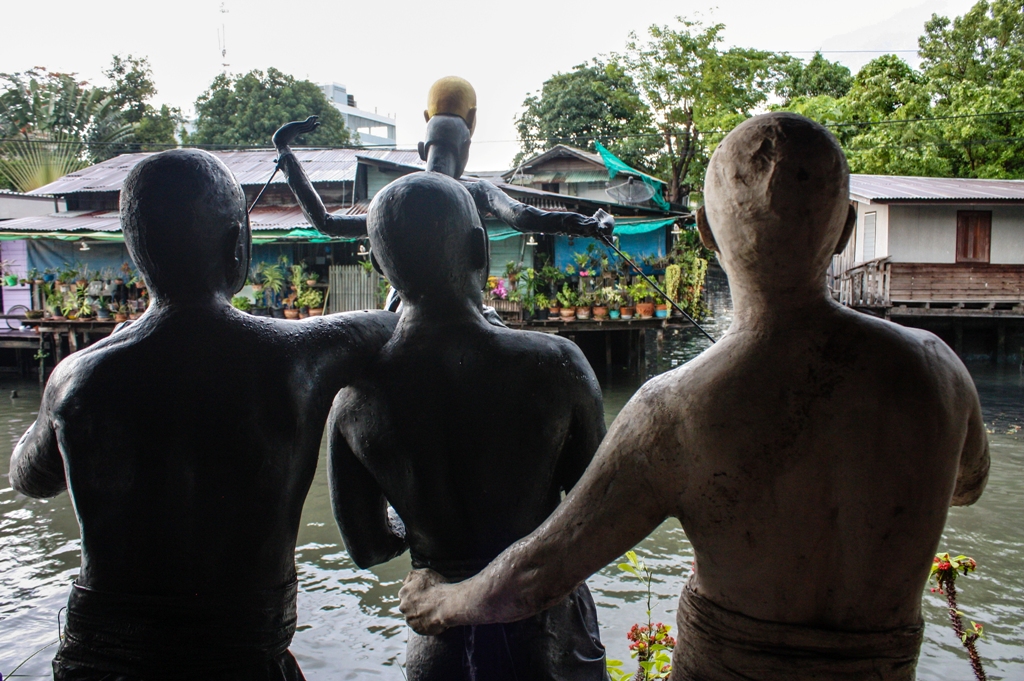