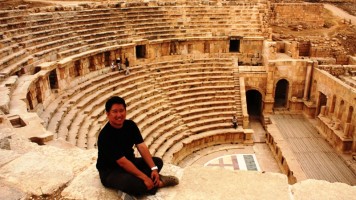 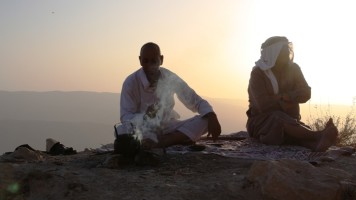 Described as “a red-rose city, half as old as time”, it seems like it’s been forever that I’ve wanted to visit Petra. I mean, an entire city, carved out of sandstone cliffs accessible only after walking through a 2km canyon? Built in the 6th century BC and flourishing with a population of about 20,000

Nabateans in its heyday only to be abandoned and lost to most of the world at the end of the 12th century after an earthquake and foreign domination, and only recently re-discovered in the early 1800’s? You couldn’t MAKE this stuff up. I could barely sleep the night before visiting. What I wasn’t expecting was how physical a day it would turn out to be…

Petra must be entered through The Siq, the once ceremonial entrance to Petra, a winding walk of almost a mile through a narrow fissure of towering 80m reddish sandstone cliffs. Along the way, you can still see channels cut into the rock that once held pipes for an elaborate water system along with niches for images and votives. We arrived shortly after 7:30am, long before the tourist buses, and practically had the Siq to ourselves, giddy after every twist and turn, wondering which one would finally let us out to Al Khazneh, the Treasury. Walking through the Siq was almost like walking back in time.

I literally gasped to finally come face to face with the most famous face of Petra, the royal tomb known as the Treasury. The Khazneh’s stone facade is supposed to change colors throughout the day. It looked yellowy-pink in the morning and as we were heading out in the late afternoon, a deeper rose. Unfortunately, no one is allowed inside, but the facade itself is simply breathtaking.

From there, you wander around the expansive city, with innumerable caves hewn from the rock just about everywhere you look. Then there’s the 7,000 seat theater carved out of solid rock (I can’t even begin to imagine how they did that 1,900 years ago).

It’s simply amazing to just walk  and gape at what must have been a spectacular city in its day. The different hues of the rock just add to the appeal. We eventually passed colonnaded streets on our way to Ad Deir, the Monastery. When the Bedouin boys hawking donkey rides point to it, it looks impossible to reach, perched high up in the mountains. In fact, it’s a serious climb of about 800 steps (with stalls selling souvenirs and water along the way). All throughout Petra, there are people offering four-legged transportation of all types. A free horse ride from the visitor center to the entrance of the Siq is included in the steep ticket (JD 50)

but you’re expected to tip a whopping JD 3 which makes it no longer attractive. In front of the Treasury (and really, almost everywhere else), touts try to sell you donkey and camel rides. It really isn’t a bad idea, if you don’t want to climb the steps. Since I had never been on a donkey before (and definitely NOT, ahem, because I didn’t want to climb the 800 steps considering we had a whole day of walking ahead of us), I subjected a poor, hapless donkey to climbing the stairs in my stead. Donkeys are supposed to be sure-footed, right? That’s the adjective I usually hear associated with donkeys. However, my donkey seemed to have a death wish as he

constantly eschewed the middle of the stairs, preferring to walk on the far side, inches away from a nasty tumble. I hung on for dear life, especially when he stumbled once (what happened to “sure-footedness”!??) and finally made it to the top way ahead of my travel companions. The Monastery is huge and quite beautiful, also carved into the stone and similar to the Treasury, but with less embellishment. A donkey ride to the top? JD 4. Admiring the views while sipping a cool drink? Priceless.

All in all, we walked practically non-stop for about 7 hours in the sun, scampering over rocks, exploring nooks and crannies and generally being blown away by the resourcefulness of the ancient Nabateans. By the end of the day, we were totally exhausted and could barely force one foot in front of the other on the uphill stretch leading out of Petra, but we all agreed that it was one great day.

Travel tips: (1) There is only one restaurant within Petra itself, so stop by the supermarket and pick up some snacks or have your hotel arrange a packed lunch. With all the heat and walking, you really won’t feel like eating very much, so something light will do. I was happy with my donkey ride up to the Monastery, but bargaining is required. The initial price was JD10 which I got down to JD4. As with all the other animals in the park, they are all led by a guide and don’t necessarily travel much faster than walking speed so it’s not as much about speed but saving energy. The walk up to the Monastery typically takes about an hour and you will need to come down the same way. (2) I only stayed in Petra for one night, at the Cleopetra Hotel. While it got excellent reviews on tripadvisor.com and provides free transport to the Petra gate, I felt it was slightly overvalued at JD 25 for a teeny-tiny single room.