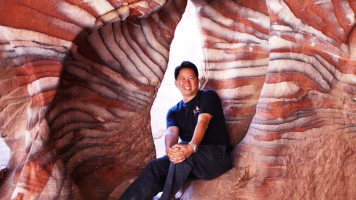 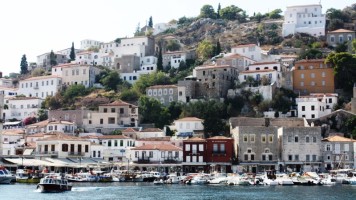 Jordan made it onto my bucket list solely based on mystical Petra, an entire city carved in stone. So it was that I found myself in the Hashemite Kingdom of Jordan.

Admittedly, I didn’t know much about Jordan and really hadn’t done very much planning for this leg, other than downloading some possible side trips other than Petra. But what I’ve seen in Jordan has totally blown me away, and for all the right reasons. While Amman is an interesting city in its own right, you really need to get out of Amman to visit most of the sights Jordan is known for. While about town, I just so happened to eavesdrop on a Spanish couple, Miguel and Bea, asking questions from the Tourist Office about hiring a taxi to Petra. Five minutes later, the three of us were hashing out a plan to take a road trip practically the entire length of the country. Add a French-by-way-of-Tunisia solo traveler (Bonjour, Walim!) I happened to meet at the Roman Theater to the mix and our little impromptu United Nations tour group was formed, with a hilarious Jordanian-by-way-of-Russia taxi driver leading the way (“America, he have two children. One Israel. Another one, Jordan”.)

Leaving the traffic of Amman behind, we head towards Madaba, “the City of Mosaics”, a short 45 minute trip from Amman. It’s said that under almost every home lies a mosaic waiting to be discovered. The still colorful mosaics depict everything from wildlife to plantlife to religious scenes and maps of the ancient world. (Entry to Madaba Archeological Park, 1 JD) The most famous mosaic is a map of the Middle Eastern world, circa 6th century, with more than 2 million pieces of colored stone. Unfortunately, mass was being held in the Greek Orthodox Basilica of St. George, where the map is located, on the morning we arrived. From there, we drive past dusty, arid landscape up to Mount Nebo, believed to be the place where Moses was buried and an early pilgrimage site for Christians in the fourth century. On a clear day, you can take in a huge panorama encompassing the Jordan River Valley, the Dead Sea, Jericho and even Jerusalem. Also at the top, there is a monument to Moses (under construction). (Entry fee, 1 JD) However, the stop I was most looking forward to on this road trip to Petra was the Dead Sea. Who hasn’t seen pictures of people floating on the Dead Sea while reading a book? I’ve always wanted to be that person. What does floating weightless really feel like? Not only is the Dead Sea the lowest elevation on the Earth’s surface (423 meters below sea level), it’s known of course, for being super salty, about 9 times as salty as the ocean. When you first step in, the water feels not quite slimy, but almost slick. Arms and legs seem to lose all direction, fighting to keep your body submerged. It was such an incredibly weird, almost weightless feeling!

It was almost easier doing nothing and just letting yourself float than actually trying to swim. I thought the water would be as salty as maybe gargling water. But when I put a single drop on my tongue, it totally stung! I can’t imagine what it would feel like if it got into your eyes.

There are lots of lux hotels on the Dead Sea, playing up the therapeutic benefits of the Dead Sea. For daytrippers, the Amman Beach Club (entry JD 15, towels JD 1.5, lockers JD 1.5) sports two gorgeous swimming pools and nice facilities, including a decent buffet restaurant (JD 12). You can also get your own coating of black mud from

the Dead Sea (JD 3). I’m not sure if I’d classify it as a beach, per se. It was more crushed rock than sand… Because the Dead Sea makes up part of the de facto border between Israel and Jordan, there are actually very limited areas you’re allowed to swim. I guess the police don’t want people “accidentally” floating over to Israel (which wouldn’t be that hard, seeing how easy it is to float here!) Jordan is also known for its desert castles, one of them being Al Karak, an ancient Crusader stronghold. The castle is unimpressive except for its size, certainly, much rougher than what you’d normally think of when you hear “castle”. The area was also successively inhabited by the Moabites, Romans and Byzantines. Our road trip continued to Petra, which deserves its own post, and then to Wadi Rum, purportedly one of the most stunning desertscapes in the world (also known for its connection with British officer TE Lawrence of “Lawrence of Arabia” fame). We decide to camp overnight at Jabal Rum, one of the many desert encampments.

Rows of bedded tents, surrounded by mountains and sand. Was it an authentic Bedouin experience? Not at all! But did it have nice ablution blocks, an excellent dinner (of lamb and chicken cooked with coals, underground) and some lively Arabic music and dancing? Absolutely. I didn’t join in cuz I didn’t want to show off my mad dancing skillz, ya know… but a fun time, nonetheless. We woke up bright and early at 6 the next morning in time to be taken by converted pickup truck into the desert. I think I’ve seen more stunning desert in Namibia, but this was unique in that the sand and craggy mountains of sandstone and granite glowed in orange and brown hues. Finally, we made our way to Aqaba, just 10 km from the Saudi border and across the water from Egypt, for a refreshing swim in the startlingly clear waters of the Red Sea. While the beach in the city center was dingy, some beautiful beaches were to be had about 10km south of the city. It’s easy to see why the Red Sea is known for its snorkeling and scuba diving.

All too soon, we were back on our way to Amman after an amazing road trip where we saw incredible sights and had great pinch-me moments, one after the other.

Travel tip: Every leg of this road trip could have been done with public transportation or shared taxis.  I hardly saw any travel agencies around Amman. Instead, most hotels will sell their own tours, based on four people sharing. If you don’t have your own group, they will try to put guests together. Of course, if you can get your own group

of 4 together, all the better. The freedom to stay as long or as short as we wanted at various sites, stop and eat at authentic local places or stop and take photographs at the many scenic spots along the road was well worth the expense. We just lucked out in getting four together with similar tastes and minimal fuss. Shared between the four of us, the taxi for three days totaled JD 55 per person. Most trips to Petra will take the multi-laned, very well maintained King’s Highway. The scenery is pretty non-descript, though. A longer way is via the Queen’s Highway where there are many towns to explore, including the Dead Sea area.