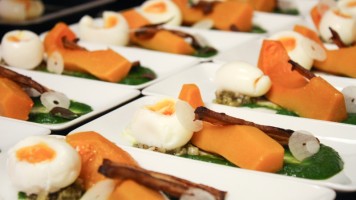 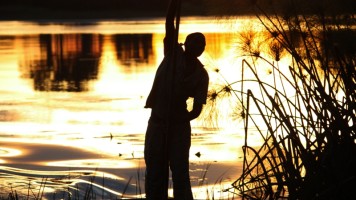 Not long ago, I wrote a post about how I felt caught between two worlds – the Western world I was brought up in, and the Eastern one I was born to and now call home.

If that weren’t enough, I’m a product of bilocation in my very own country. You see, my father’s family is from Thai Binh, a small province 110 km southeast of Hanoi, in the north of Vietnam. My mom’s family is from Cai Rang, a tiny country town outside of Can Tho, in the south. While I’ve never been to my father’s hometown (the entire family moved to the south after Vietnam gained independence from the French in 1954), I have visited my mother’s side of the family.

It was on one of our first trips back to Vietnam. 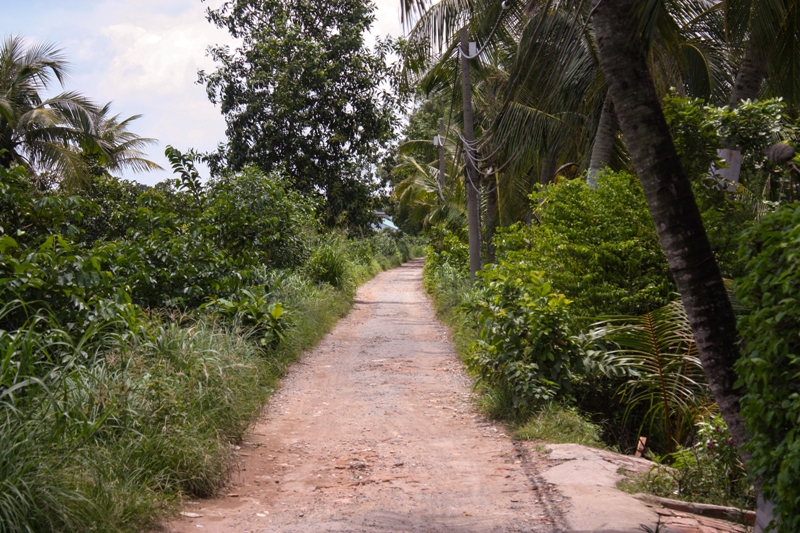 I remember them laying out a feast for us, these relatives who I had never seen or heard of, including a cabbage salad with tiny little eggs that I found out were from inside the stomach of a chicken. Until then, the only chicken I had ever seen was the one nicely packaged in my local supermarket, its eggs fully formed and nestled inside crates. These veiny oddly shaped spheres resembled nothing I had ever seen before.

A table was set out outside, under a fluorescent lamp, a lone light in the pitch dark surrounds. My little bowl of nuoc mam was alive with tiny little gnats that had fallen from the light above and were now brazenly doing the backstroke in my fish sauce. Then came the main course: grilled turtle. Again, there were eggs (what IS it with eggs!??!) which my great aunt made a big show of giving to me as the prized delicacy. I remember the crack of the turtle’s shell as they quartered it and gave me a piece, sinews and teeny claws clearly visible, even in the dim lighting. 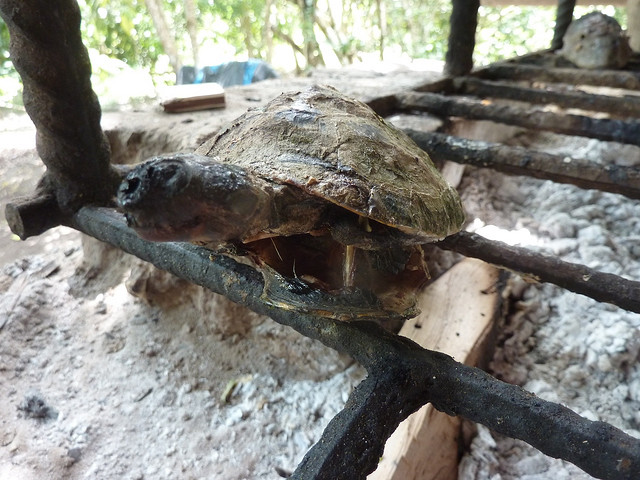 Early the next morning, not surprisingly, I had to make a rush for the bathroom. My mom handed me a flashlight and pointed me in the direction of the toilet, a few wooden planks suspended over the fish pond. In the half light, I tried to go, really, I did. Lord knows I wanted to. But my body simply  would not cooperate.

So, a distant cousin was summoned, still groggy with sleep, to drive me over to another relative’s house, one with a “Western” toilet (which actually turned out to be an outhouse, but with a familiar toilet throne.) Now that I look back, I’m sure they thought I was the most spoiled brat ever, one who turned his nose at their simple, unadorned way of life.

I’ve come a long way since then, trying my best to embrace everything about Vietnam. I recognize my upbringing has been a blessing, being familiar with the strange words used in the north that aren’t here in the south. The heavy northern accent doesn’t phase me. So when I came across a graphical book about the differences between Hanoi and Saigon, I was intrigued and found the author, graphic designer Le Duy Nhat, 25, for a chat over coffee. 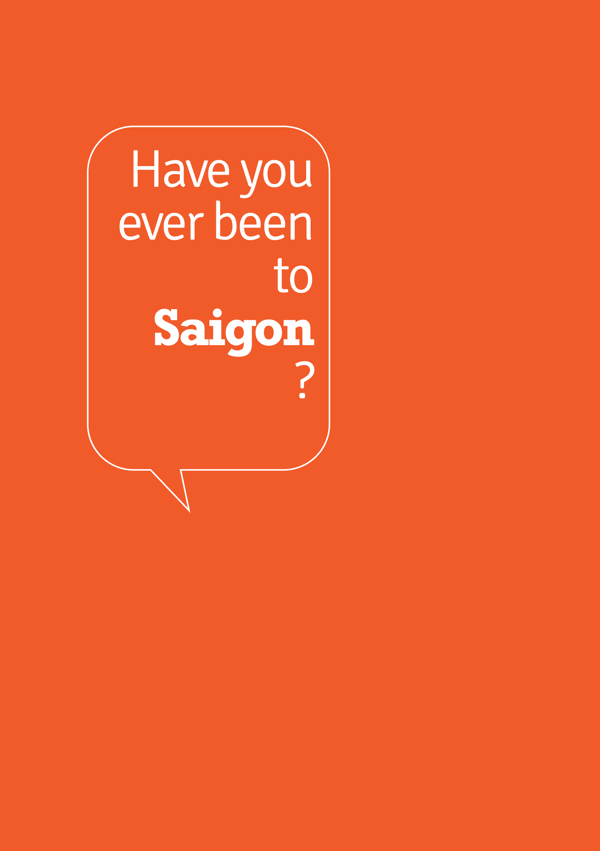 Born in Thanh Hoa, 136 km south of Hanoi, Nhat moved to Ho Chi Minh City at the age of 18 to attend university. Armed with a degree in IT, it didn’t take long for him to discover that he didn’t like working with hardware.

“I love images. Even TV commercials and advertising posters speak to me”, he said.

Back in graphics design school, Nhat created a whimsical book outlining the differences between Hanoi and Saigon for his final project and uploaded the 31 page book onto Behance. Within a week, more than 20,000 people had viewed it. I asked him why he thought the concept resonated so much with people.

“I think people yearn for traditional culture. People also like to compare things. People also comment on their own observations. I think people who live in Saigon but go to Hanoi for business really get my work. Vietnamese culture is like a gold mine that hasn’t been fully excavated. Why can foreigners come to Vietnam and write books for other foreigners and we Vietnamese can’t?”

Here are some of my favorites from Nhat’s images, reprinted with his permission, along with a few of my comments. 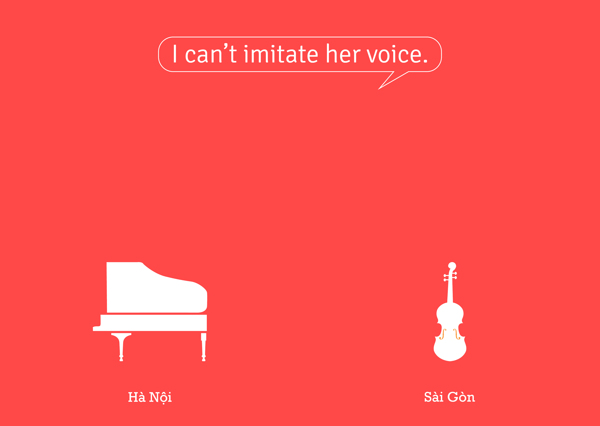 The Hanoians are pretty proud of their hard Vietnamese accent, much like the British are of the Queen’s English. In comparison, the Saigonese tend to drawl, drawing out their vowel sounds and pronouncing two of five of the Vietnamese tones exactly the same (sacrilege!). Funnily, though, when they sing karaoke, many of them put on a Northern accent, something I still don’t quite understand… 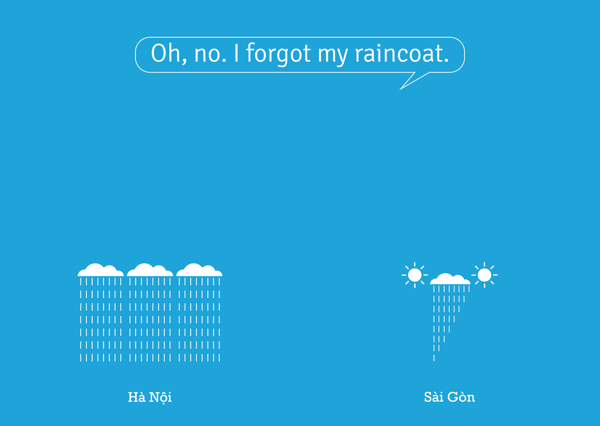 I visited Hanoi was in January one year and couldn’t believe Vietnam could get so cold. I was last there in October, and the dreary gray weather was a downer. I was so happy to return to sunny Saigon, where even thundershowers only last 20 minutes. Hanoians have this weird habit of sucking air through their teeth in defense against the foul weather that plagues them throughout the year. 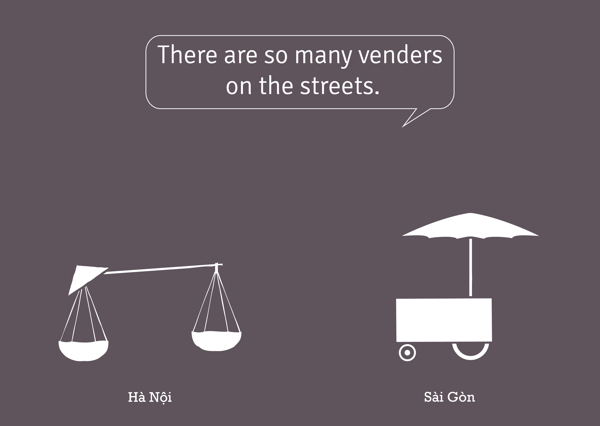 One of the things I do love about Hanoi is walking through the Old Quarter where because of the very narrow streets, vendors favor yokes as opposed to carts to transport their goods. 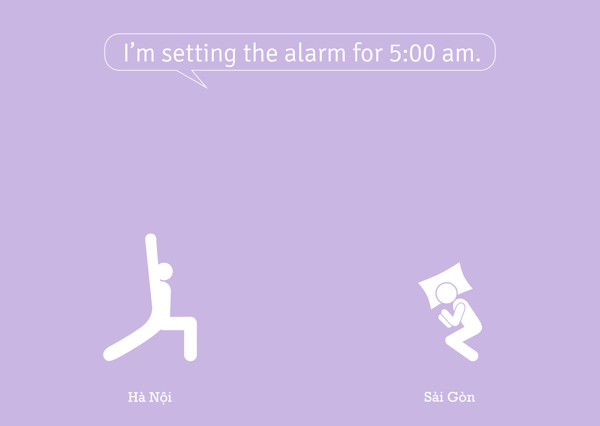 Saigoners love to party late and wake up late. When in Hanoi, a brisk morning walk around the city lake of Ho Hoan Kiem is rewarded by masses out and about doing exercises, walking and getting an early start to the day. 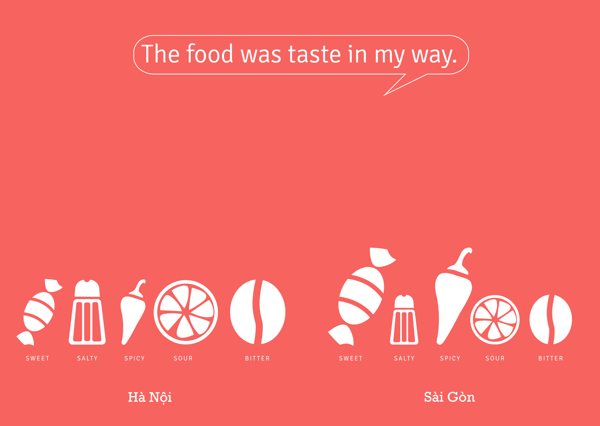 Growing up with northern cuisine every Sunday afternoon when we’d visit my grandparents, I’ve come to love the reserved palate of the Northerners, as opposed to the flamboyance of the south, where everything is a bit sweeter and spicier. 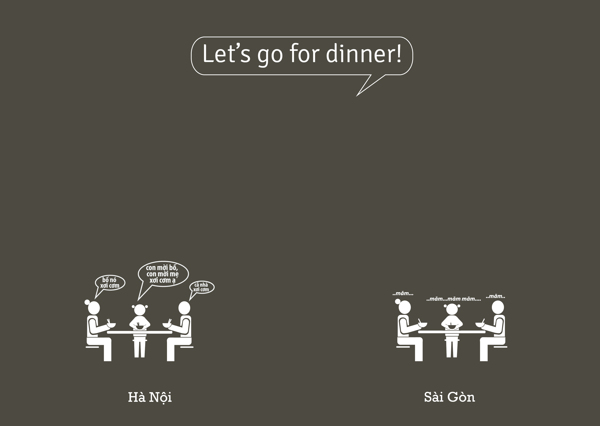 Before every meal, my father would say, “Xin moi”, something akin to bon appetit, in deference to my grandparents. They always took the first bite before we were allowed to eat. In the South, it’s every man for himself with no time for such silly pleasantries. 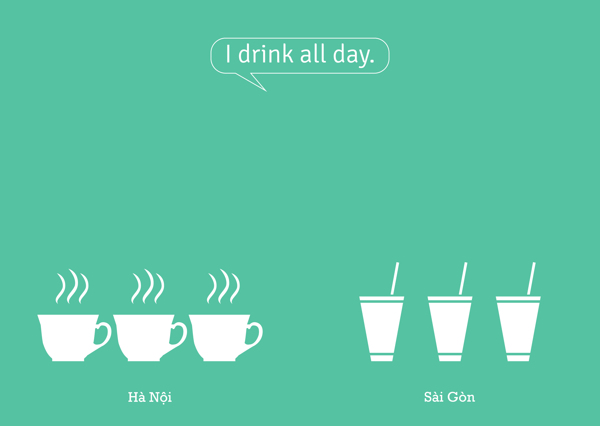 Strong, hot tea is de rigeur for northerners. A warm tea set is always on hand to welcome guests, often with a display of pouring tea into one cup, then using that cup to pour into the next, and so on, rinsing the cups out before use. Northerners love their tea strong, with lots of tea leaves in the cup, while Southerners are just as likely to pick Lipton or a soda. 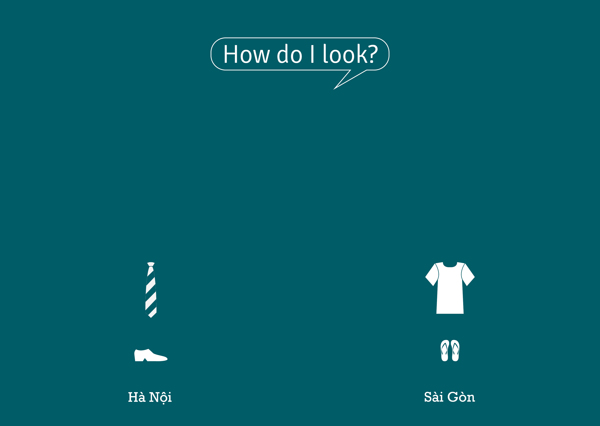 While we were talking about his book (of which he only has the one prototype, despite my proddings to quickly get t-shirts and postcards made up), we got to this picture and Nhat pointed to what I was wearing – a t-shirt with some baggy pants, while he was in slacks and a button-down shirt.

“Things are just more casual in the south,” he says. 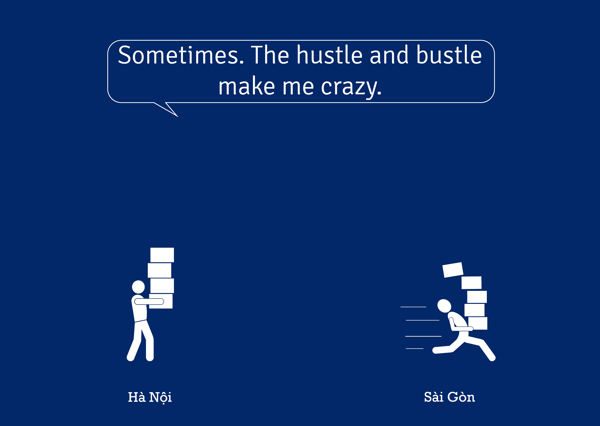 I think this is my favorite of all the images. Ho Chi Minh City is go-go-go 24/7 while Hanoi is slightly more laid back. Streets are smaller and people don’t seem as aggressive as in Saigon, the city that never sleeps. 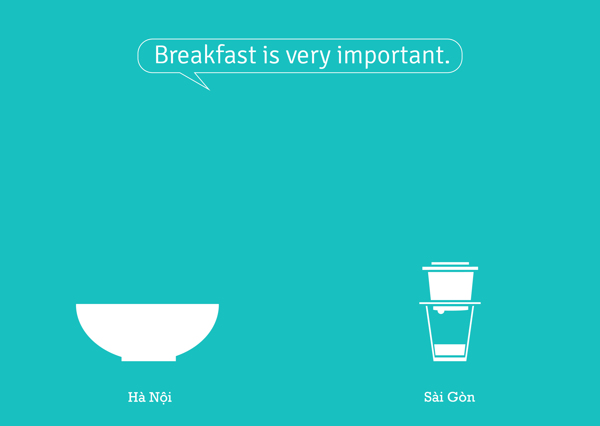 If breakfast is the most important meal of the day, the Hanoians have got it down. I love wandering around the Old Quarter in the early mornings, choosing amongst the makeshift eateries comprised of a glass cabinet, a brazier and a few very low stools that seem to magically appear. In Saigon, a cup of drip coffee with a dash of condensed milk makes for a quick breakfast. 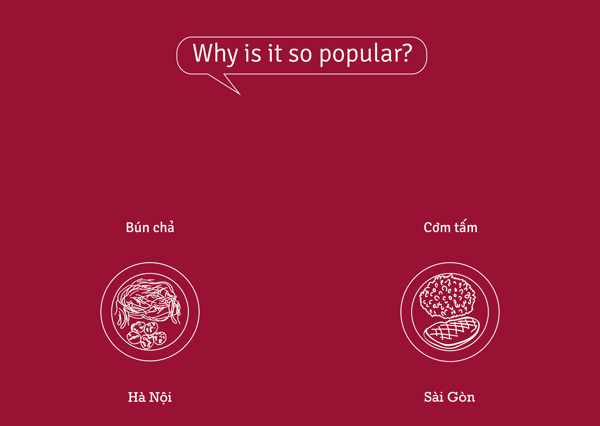 Two of the most iconic meals, both delicious. Bun cha in the north is essentially grilled pork, almost charred, and eaten with a heap of raw vegetables, some pickled carrots and radishes, all soaked in a watery fish sauce, so much so that it’s practically a noodle soup. Saigon’s com tam, a grilled pork chop with sides of meat quiche, pork skin and fried egg, topped with a sweet fish sauce, is sold on every corner for about USD 1. Strangely, these dishes, while hugely popular in their respective cities, aren’t seen on nearly the same scale anywhere else. 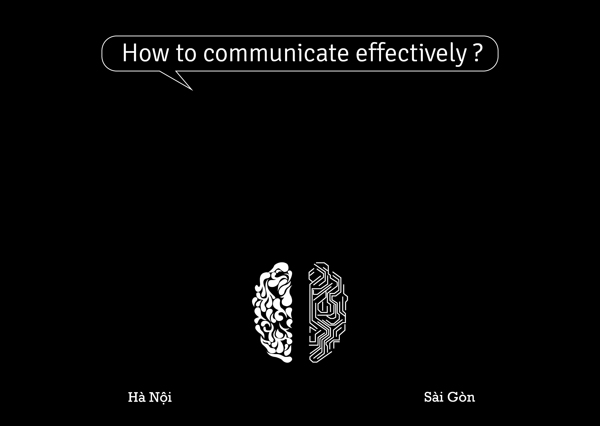 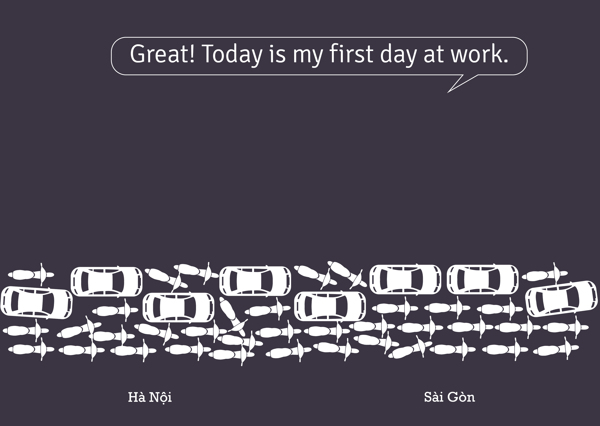 No matter where you are though, Vietnamese traffic is legendary. While even crossing the street might seem a suicide mission to the uninitiated, I’ve come to view the traffic as a perfectly swirling school of fish. While it may appear impenetrable from the outside, every fish is reacting to the one right next to it, rarely colliding.

So what do you think? Saigon or Hanoi?

See all of Nhat’s images on his Behance portfolio. To read my article on Nhat in Oi Vietnam magazine, click on the image below. 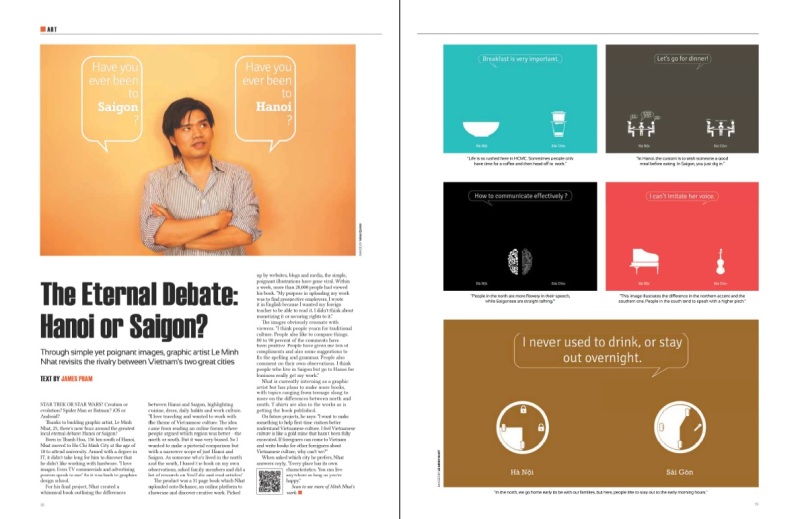 28 thoughts on “Saigon vs. Hanoi – The Eternal Debate”