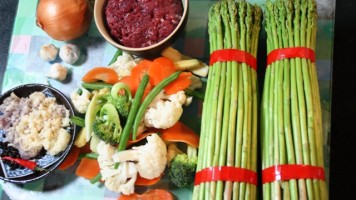 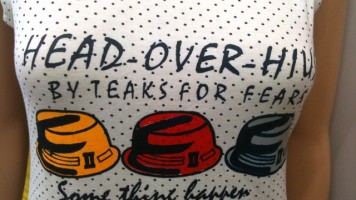 Photo of the Week – The Secret to Happiness Is…

The Agony and Ecstasy of Bargaining in Vietnam

I don’t know where I got the bargaining gene from. Certainly not from my middle-class suburban Virginia upbringing.

Maybe it stems from being ultra-competitive in almost anything I do and just hating to lose.

Either way, it’s served me well in my travels abroad and specifically the past 11 years in SE Asia, first in Cambodia, then Thailand, and now Vietnam. 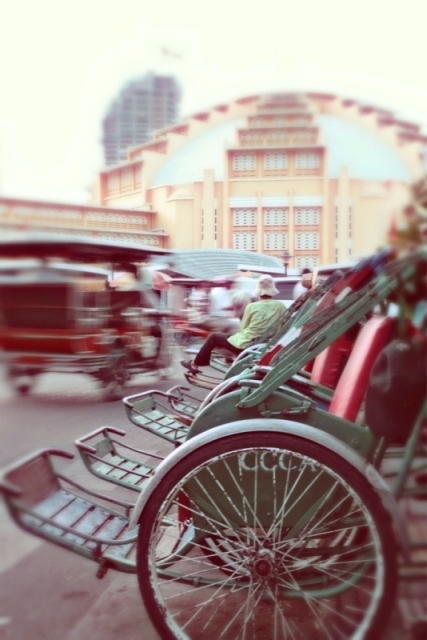 One of my most vivid bargaining moments came a few years ago when a couple of friends were visiting me in Phnom Penh. I had arranged for a tuk-tuk to take us just a five minute ride from my home to the bus station. We agreed on a price. Everything was fine and he followed me a block back to my apartment.

I pretended not to notice when the tuk-tuk driver raised an eyebrow at his decidedly non-Asian guests and their luggage. When we got to the bus station, he demanded more. “For what?”, I asked. “For waiting for them (ie. the two minutes it took to walk downstairs from my apartment)”. What he meant to say was, “because I didn’t know they were White.”

Soon I was embroiled in a back and forth exchange that got louder and more heated by the second. Finally, I stuffed the money we had agreed upon onto his tuk-tuk and walked away, leaving the tuk-tuk driver cursing vehemently and staring daggers into my back.

As I joined my visibly shaken and even-whiter-than-usual visitors over a bowl of pho while waiting for the bus, they quietly asked me, “How much more did he want?”

Sigh. I almost felt bad there for a moment. Almost. 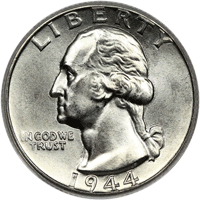 The price of dignity

What is it about bargaining that can make it one man’s agony to another man’s ecstasy? Is it getting something for way less than you planned? Or the primordial satisfaction of coming out best in a one-on-one duel? Or on the flip side, possibly the humiliation of asking for a discount? Or the helplessness of being sold something you have no idea what the true value is?

No matter how you feel about bargaining, it’s a skill that every traveler needs to possess as almost by definition, being a tourist means you aren’t privy to how much things actually cost and pretty much walk around with a huge bulls eye plastered on your forehead, a veritable wallet with legs. 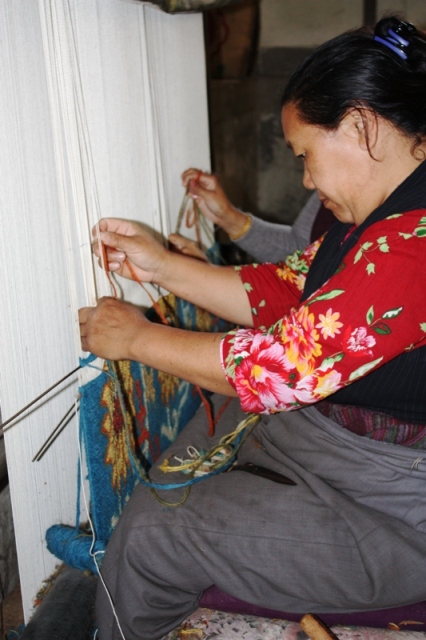 Some of my best travel memories have involved bargaining. Like the time I spent sitting down with the owner of a rug shop in Kathmandu. Before the trip, I laughed when I read blogs about travelers lugging home carpets from Nepal. But before long, I started noticing beautifully handmade rugs interspersed with cheap machine-made ones. Darting into various shops to get an idea of how much certain rugs should be, along with a quick internet tutorial back at the hotel and I felt armed with a modicum of knowledge, probably just enough rope to hang myself with.

After lengthy negotiations, the shop minders phoned the boss. Always a good sign. Over a cup of apple tea, and after about an hour of leisurely chitchat followed by a furious five minutes of negotiating, we both came to a price we could live with.

But that wasn’t the case at the Jawalakhel Handicraft Center where Tibetan refugees sell hand-woven rugs. Despite all my tried and true bargaining tricks of humor, flirting, pouting and feigning disinterest, the young salesgirl wouldn’t budge. It ended up being true what all the guidebooks said — it was fixed price. But I had to try. 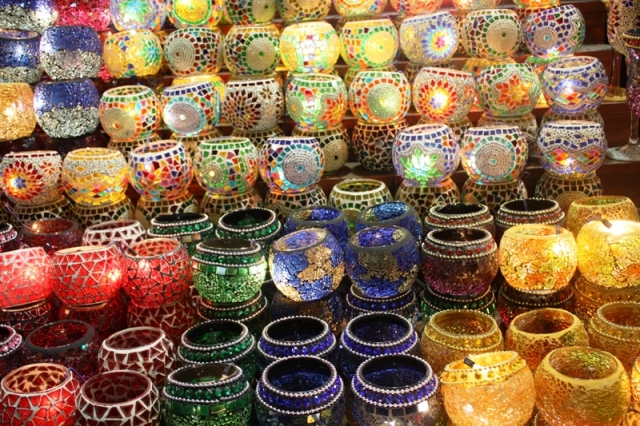 In some cultures, bargaining is simply the norm, where it’d be the exception NOT to have a back and forth with the seller. Before heading to Egypt, the number one scam travel forums warned about was touts and sellers ripping people off. But thanks to my skills honed in the cauldron of Cambodia, I found it a breeze.

Sometimes, though, being too good a bargainer can actually be a detriment. One year, I found the crafts sellers at Victoria Falls (Zambia) to be especially easy to deal with, coming down quickly from $12 to $2. With stall after stall selling very similar carvings and other crafts, it was almost too easy. The year after, I found myself back in Zambia and waited to get back to the stalls to load up on cheap gifts. This time, since I knew the prices going in, I was determined to strike even better bargains. But something ate at me. Perhaps it was the desperation behind the eyes of the sellers. Too many days of too few visitors and too many stalls. Resignedly agreeing to rock bottom prices, maybe even at a loss, just to have some, any income that day. I left with an armful of paper-wrapped treasures, but with a surprisingly bad taste in my mouth. Could it be that I got too good of a bargain at the seller’s expense? Would that extra dollar or two mean much more to an African family than to me? 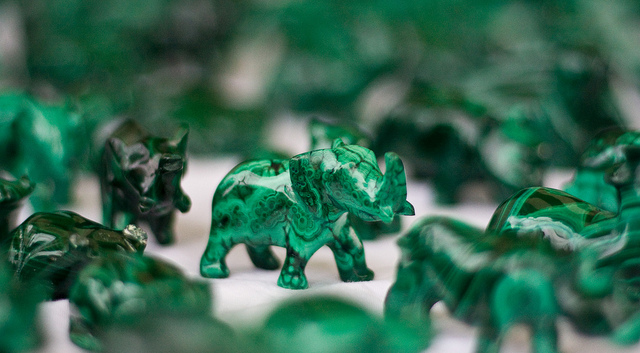 Therein lies the agony and ecstasy of bargaining. At what point is a purchase too much of a deal?

I recently explored iconic Ben Thanh market in the heart of Saigon to find out what life is like on the other side of the counter.

I first met up with four girls, each manning a stall selling identical Abercrombie knockoffs and Ralph Lauren branded polo shirts. After giving them a lesson in how to count in Khmer, they relaxed and opened up. “Tourists are master bargainers these days”, they sigh. “They often want things for less than we paid for them.” I watch as sweaty tourists navigate the narrow passageways, each girl calling out a greeting in any one of a dozen languages. A Malaysian couple stops and takes their time selecting a bundle of shirts. “How much for these?”, they finally ask. When the price comes back much higher than they want to hear, they quickly walk away, with the salesgirl on their heels immediately reducing the price by half. “We hate it when people just ask the price and go”, they moan. “It’s unlucky for business. It means the next person won’t buy either.” 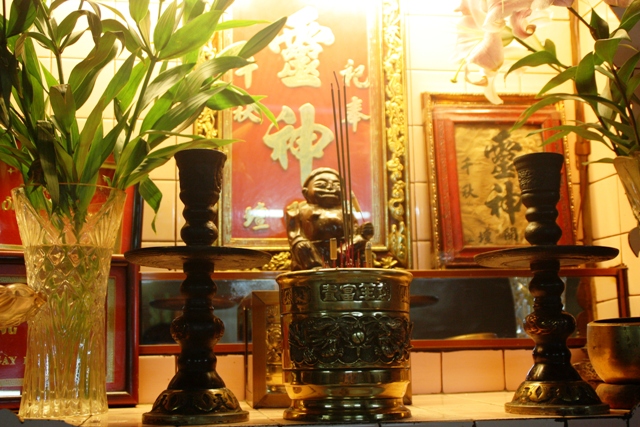 A conversation on superstitions soon leads me to a deserted corner of the market and up two flights of rickety metal stairs. It’s the room dedicated to the market gods of Good Luck, the Earth and a special idol, much smaller than the others and oddly simian in appearance. The caretaker explains that it’s the Ben Thanh market deity to which some sellers burn incense or leave an offering in hopes of having a prosperous day. At the request of the sellers, this odd room has remained unchanged throughout the decades of the market’s renovations. As he’s leaving, he says, “Just turn off the light when you go”, leaving me all alone in this strangely cold and quiet room just steps above the hustle and bustle of the market below. In Bangkok, I’ve been the first customer of the day, only to see the seller fan my cash over her stall for good luck. But here, the pseud0 Gap Girls contend, “We don’t believe in luck. It’s not right to pray for yourself to do well and others to not be able to sell.” 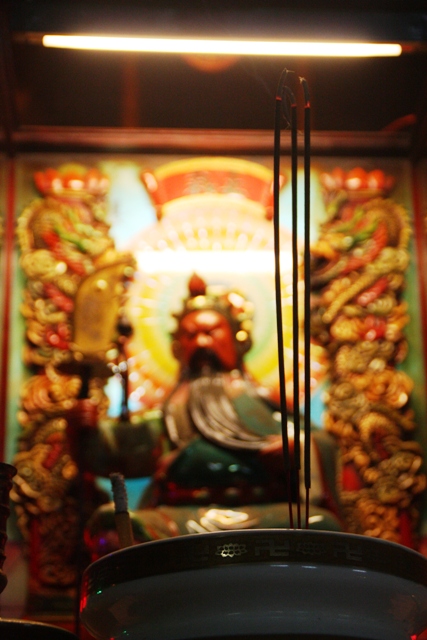 In another section of the market, Uyen presides over her cluttered stall selling a jumbled array of kitschy souvenirs. “A long time ago, a foreigner once told me: Eat a little and eat all the time. Eat a lot and eat rarely. I’ve always remembered that.” Instead of trying to gouge customers, Uyen’s approach is to strike up a conversation and offer a fair price. “It’s best to be cheerful and thank the customer either way. That way, even if they find a similar price somewhere else, they’ll always come back to my stall.” 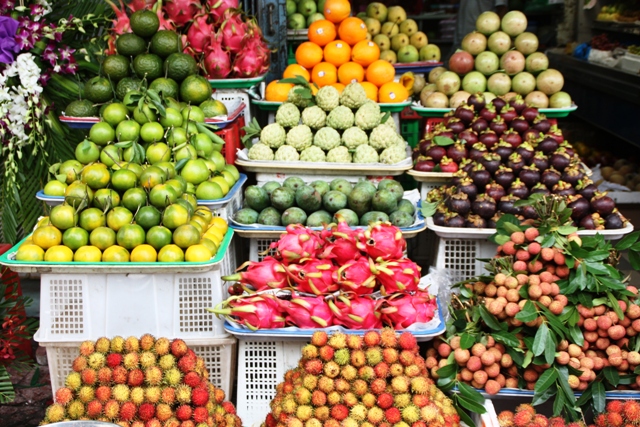 For more of my interviews with vendors in Ben Thanh and for other bargaining tips, check out my article, “Deal or No Deal”, in this month’s issue of Word HCMC.

Oh, and I’ve been nominated for Favorite Travel Blog on consumer advocate Chris Elliott’s pretty cool site, a daily must-read for for savvy travelers on travel scams and situations avoid. Voting closes on Friday. Thanks!

What bargaining tips can you add to this list?

13 thoughts on “The Agony and Ecstasy of Bargaining in Vietnam”