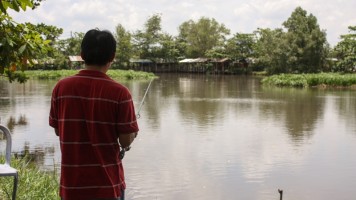 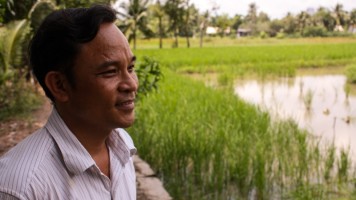 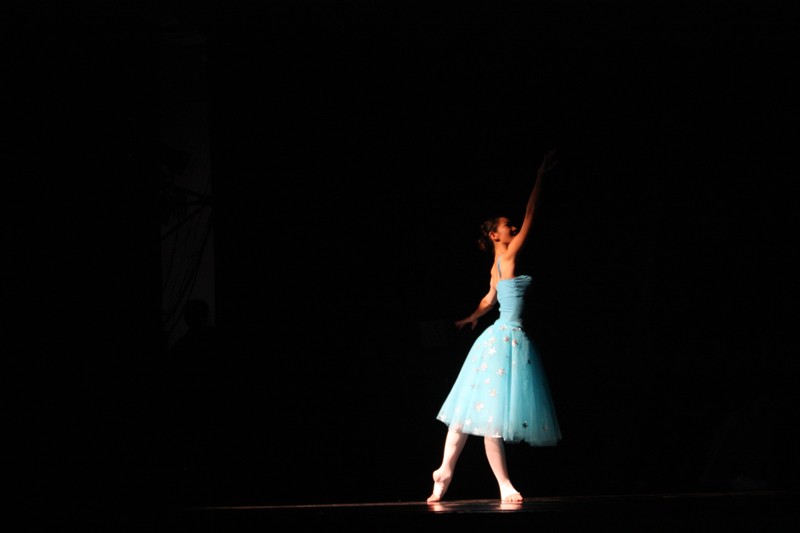 I’ve never been a big fan of ballet. Surprising, I know, considering I’m such a huge supporter of the arts.

But when I got a chance to sit in on the final rehearsal of Cinderella at the Saigon Opera House, I didn’t refuse (mostly because I love the old world glamor of the Opera House and will go there basically for any reason).

So, on a weekday morning, I rushed to make the 9am start time. But true to Vietnamese (in)efficiency, when I got there, I was told the rehearsal had been pushed back to noon. However, the delay actually turned into a better experience as I got to hang out backstage and watch the dancers go through their paces.

During long breaks for lighting, fiddling with ropes and props and last minute choreography notes, the performers sprawl across the stage in various positions of repose, toes perpetually pointed as if that were their natural state. Guys in white wigs and period costume fiddle about with their phones as others stretch and go through their warmups. 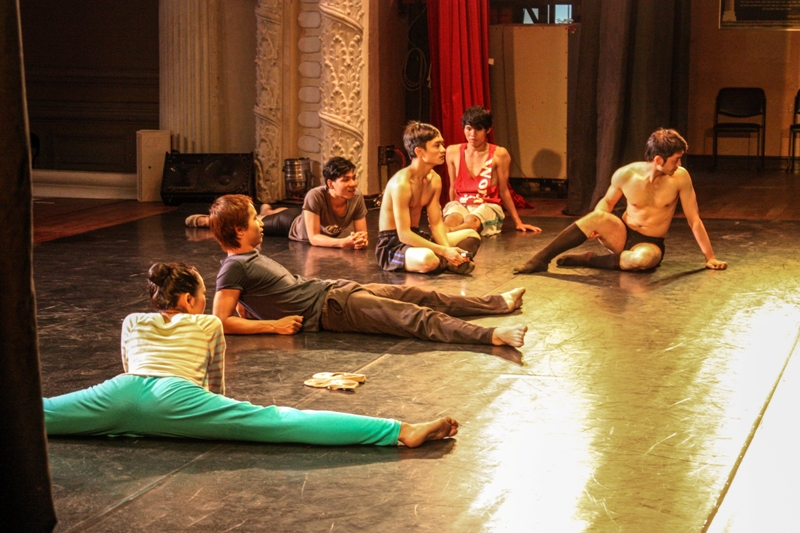 I glance up from my book when the dancers start practicing leaps and lifts. I’ve never seen ballet dancers up close before and am amazed at the almost superhuman amount of hang time allowing them to complete multiple rotations with effortless grace as though they were on an ice rink.

I pretty much felt like Gregory Hines in White Nights.

From somewhere in the audience, one of the directors calls out, “I can see the stubble on your face!” to the wicked stepmother, to a chorus of laughter. In a throwback to Shakespearean times, muscled bodies in frilly dresses of Cinderella’s stepmother and stepsister are revealed to be male danseurs, tattoos, large hands and feet and hairy legs and armpits giving away their secret.

After some light reading and a trip to the mall across the street, noon finally came. At about 12:30, someone arrived to say there was going to be more delays to the collective groan of the two dozen or so invited to watch the rehearsal. Finally, the show started at about 1:30pm. 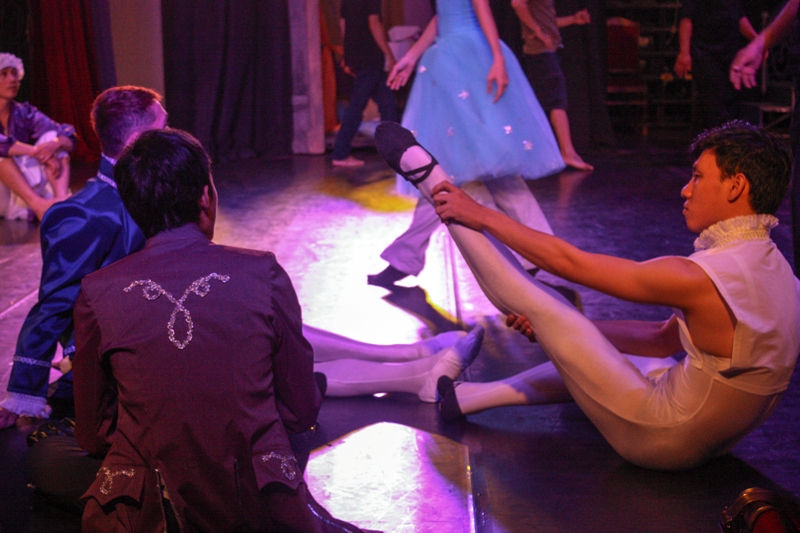 Seven hours after I first arrived, I had finally seen my first ballet. What I saw was enough to track down the two leads, Cinderella (Minh Tu, 21) and Prince Charming (Duc Nhuan, 27). Over coffee later in the week, I got to ask this couple (who are real-life sweethearts) about the world of ballet in Vietnam. I love that his family are farmers and she got into ballet because her parents worked at the Opera House. Here are some of my favorite exchanges:

When was the first time you ever saw ballet?

MT: When I was small, my parents worked at the Saigon Opera House, so I often saw performers practicing. One of the experienced ballerinas suggested to my mother that I should take lessons. I’m not going to say I was talented, but even in kindergarten, I loved to dance. So when the opportunity came to take free lessons, I was eager to learn, mesmerized by the teacher.

DN: For me, I think it was destiny. When I was 13 years old, an uncle from Hanoi came to visit me in my hometown and invited me to come back to Hanoi to audition for the Vietnam Dance College. I had no experience whatsoever with dance. But they played music to see if I could walk and clap in tune. I actually failed but because there were too few boys who auditioned that year, I got in. At first I didn’t like it. Into my second year, I viewed it as something to do just for fun. I never thought it would turn into a career. 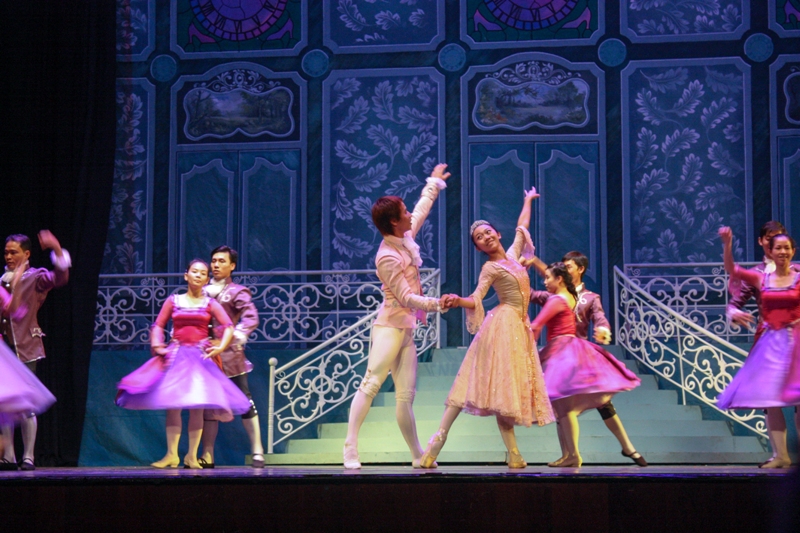 What do family and friends think of your career?

MT: When I meet new people, they’re always surprised to hear I dance ballet. People still don’t know a lot about ballet or they think it’s too hoity-toity. They often think I’m a backup dancer for some pop singer.

DN: My parents are not artsy people. They’re farmers. But when they saw me doing ballet as a kid, they were happy to have an artistic son. When I finished dance school, I moved to HCMC. So my parents have only ever seen me dance professionally on TV. They’ve never seen me dance live.

Is ballet a viable career option?

DN: In the mornings, I have ballet class at the Ho Chi Minh City Dance School. But in the afternoon, I sometimes dance at private functions. I’ve done banking seminars, doing modern dance, whatever the clients want. After costume rentals and expenses, we each earn about VND600,000 per song. Everyone has to do work on the side like that. [Author’s note: When he says this, I can’t stop Tina Turner’s Private Dancer from playing in my head… I’m your private dancer / A dancer for money / I’ll do what you want me to do]

MT:  A lot of people get distracted, they study other things as well and then go on to university and end up pursuing a different career. It all depends on your talent and lifestyle. In my class, most have stayed in dance, working in small private dance troupes. In life, you have to eat and play. I make enough through ballet only to eat. But I live with my parents still, so I don’t go out that much. 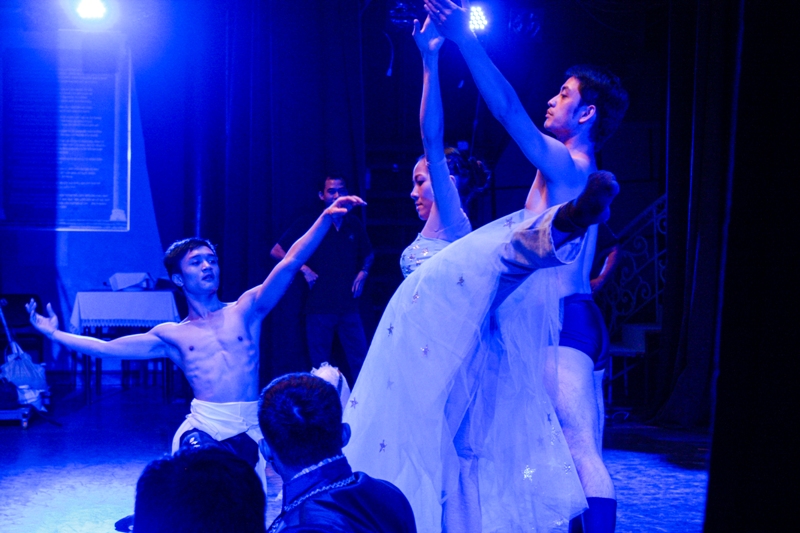 Describe the feeling of coming out on stage, dancing in front of hundreds of people.

MT: My first few steps, I try not to look at the audience too soon. I need to concentrate on the character, becoming Cinderella. I’m not normally nice and demure so when I’m in that role, I have to change the way I act. I only really notice the audience during the final bow. The stage lights are shining, emotions are brimming, everyone is looking at me and congratulating me for overcoming every obstacle to become the character. It’s pure happiness. It tells me that all my efforts have been worth it. 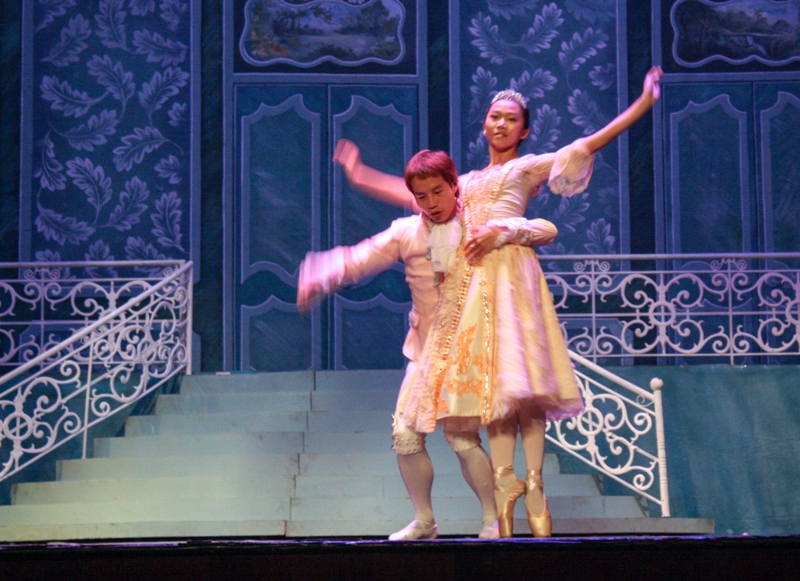 What can be done to popularize ballet in Vietnam?

DN: In Europe, there’s an upper class. In Vietnam, it’s mostly agricultural, so people don’t know much about ballet. That said, the art scene is much better in HCMC. If this performance happened in Hanoi, you wouldn’t be able to sell tickets like here. Even if you gave tickets away, it would be hard to get people to come. In Hanoi, it’s more traditional, old school. In HCMC, people like the arts culture having gone through the French and the Americans.

MT: Ballet must be easy to understand. Cinderella is a familiar story, so when people see it in ballet, they know who Cinderella and Prince Charming are or that it’s midnight and she has to go home. Even though there are no words, they can still understand the story. I want ballet to slowly make its way into popular consciousness. I want people to think, “It’s Christmas, let’s go see the Nutcracker!” People think that it’s just for the upper class, but it’s our job to bring it to the masses. 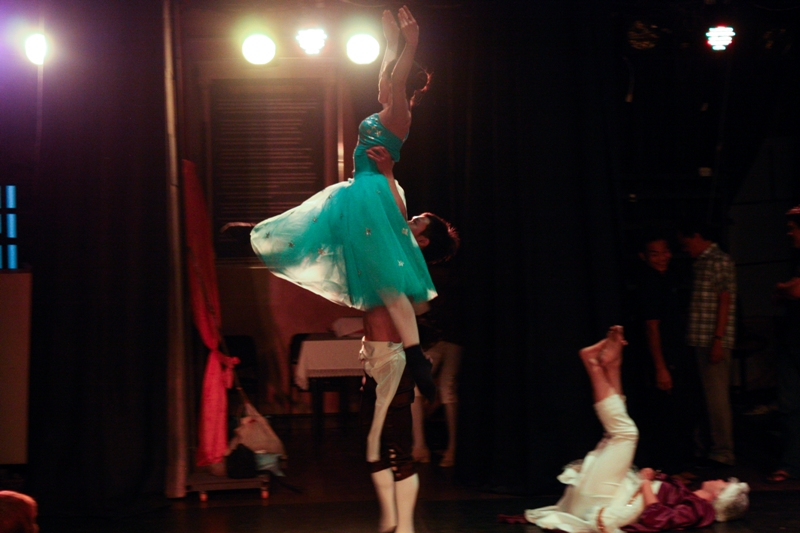 What is it about ballet that fuels you and what has ballet given you in return?

MT: It’s a difficult discipline so I like it. It’s a little like figure skating or artistic gymnastics; it’s not just technical, how many turns you can do, or how high or how strong or how beautiful you are. It’s telling a story with your body. Ballet has given me so much: a career, a goal in life, a living. I want to show Vietnamese people that ballet has a place in life and to foreigners, that Vietnam also has ballet.

DN: Ballet chose me; I didn’t choose ballet. I’m thinking of pursuing contemporary dance or modern ballet. I was lucky to get into ballet school and then had the determination to come to Saigon to work. Ballet has given me a different life. If I wasn’t a dancer, I don’t know what I would’ve been…

MT: Probably a farmer. [both laugh] 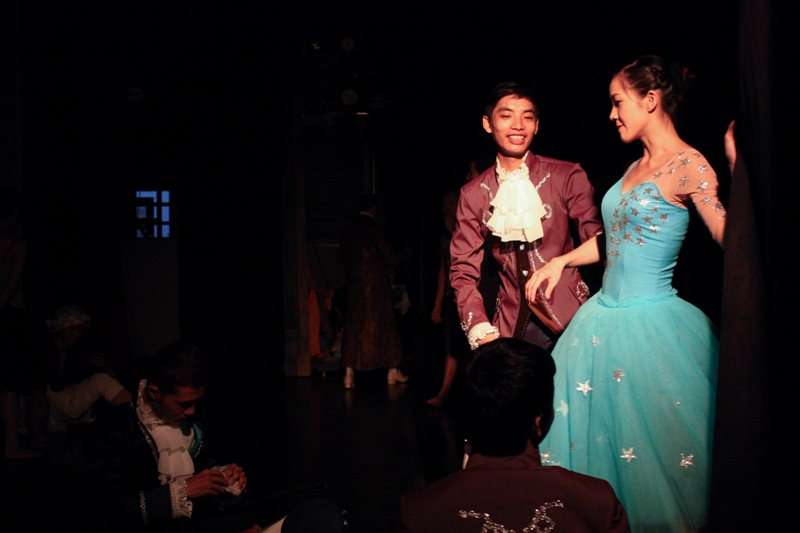 If you’re fortunate enough to be in Saigon this weekend, Minh Tu and Duc Nhuan will reprise their role in performances of Cinderella on October 13 and 14 at the Saigon Opera House. For info and tickets, visit www.hbso.org.vn

While I’m still not sure whether I’m a bona fide fan of ballet, I do know that I’m drawn to people who are passionate about what they do – whatever they do.

For the full interview, please click on the image below to read my article in Oi Vietnam. 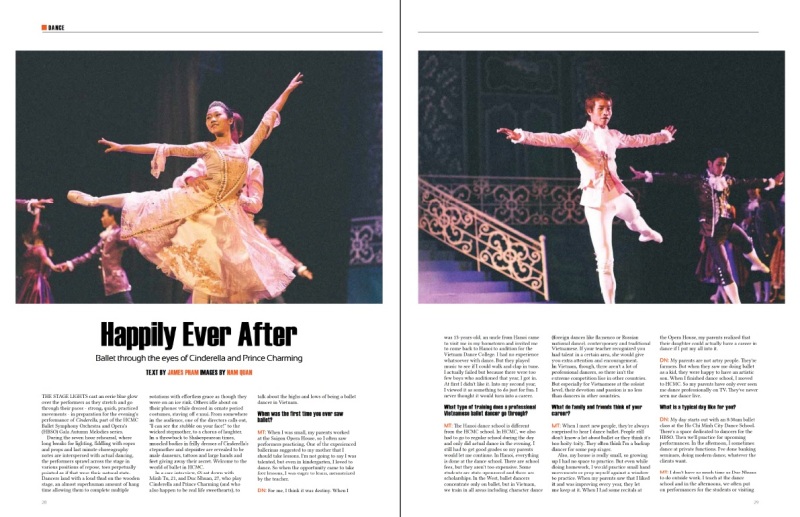 7 thoughts on “The “Other” Royal Couple”