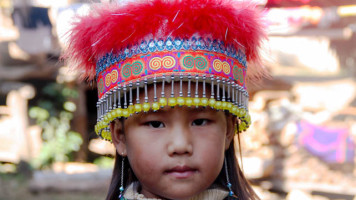 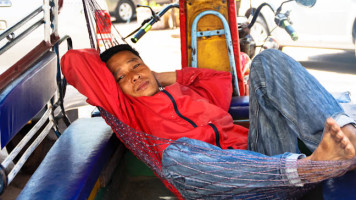 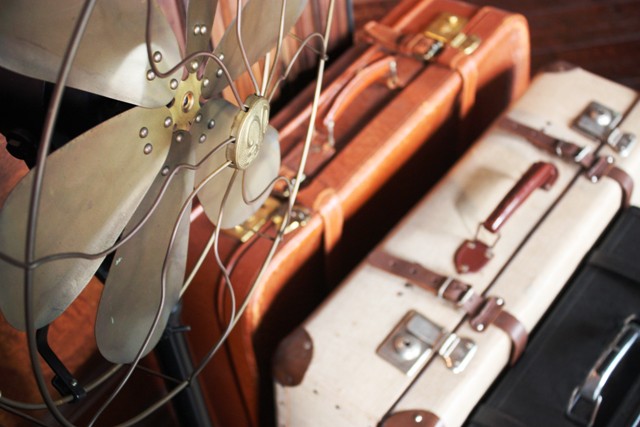 Part of the allure of travel is losing yourself, both literally and figuratively.

Who of us hasn’t relished the challenge of driving on the wrong side of the street or getting hopelessly lost in a market with mental directions like, “Turn left at the spice shop with an old lady wearing a blue shawl”, or getting sent on a wild goose chase by Google Maps where it actually took four times as long to walk somewhere? 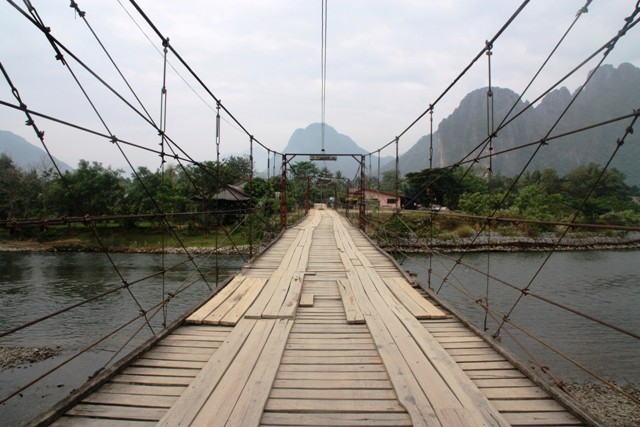 Equally charming is losing some inhibitions when you travel. After all, you’re in a strange place, around strange people, put in strange situations. I’m assuming whatever it is that happens in Vegas (and staying in Vegas) isn’t referring to scrapbooking or competitive yodeling. Some people might lean towards more self-destructive behavior when they’re liberated from the confines of their cubicle. Others simply stop shaving or showering or whatever annoying routine they have to deal with in “real” life. There’s a reason characters like Mr. Ripley, Stella and Liz Gilbert and movies like “The Beach” resonate with people. We inevitably use our holidays to shed baggage that we’ve spent 50 weeks lugging around.

My travel confession is that I always make one splurge purchase in every new country I visit. It has to be something evocative of the trip, something that will provoke a visceral reaction in me long after I get back and the photos have been passed around and the tan has faded and I start forgetting the names of those places I vowed I’d never forget.

And then it happens.

I’ll look down at the rug that I walk on a hundred times a week without noticing and suddenly remember that time I bargained for two hours with an old Nepalese rug dealer over a cup of apple tea. Or the pencil cup that I reach in 10 times a day but something makes me stop and pick it up to smell the fading scent of the Balinese cinnamon embedded in the design. Sometimes I’ll absentmindedly finger the small malachite box that holds my paper clips and rubber bands that I got in a Parisian flea market almost 20 years ago.

These tangible holiday reminders don’t necessarily have to be expensive. There was that small shop in Beijing with an old man making clay busts of people as they waited. “What a unique momento,” I thought to myself. Now, it hardly matters that the bust only vaguely looks like me, and only then from a very specific angle, or that guests ask me why I have a bust of Chairman Mao on my bookshelf. After all, it’s not for them. It’s for me. When I’m by myself watching TV or listening to music and happen to glance at it, memories of Peking duck and hutongs and walking along The Wall come flooding back to me.

Sometimes it may be a financially irresponsible buy. Like that time I saw a beautiful hand-hammered silver and gold ring in a tiny workshop in Athens that looked like it was dug up from the sands of the Coliseum. I scoffed at the 300 Euro price tag. Conditioned from years of living in Asia to break jewelry down to only the value of its parts, this mostly-silver ring was worth USD 100 at best.

It nagged me for the rest of the trip.

Obsessed, possessed, I searched for something similar in every subsequent country I went to on that trip, working through markets at a feverish pace in Florence, Rome and Paris, buying inferior impostors and immediately hating them, ruing my lost opportunity to buy an overpriced but now irrationally needed hunk of metal.*

Yes, we’re all about excess, romance, idiocy and serendipity when we travel. That’s why I was intrigued to visit Vang Vieng, Laos for the first time. 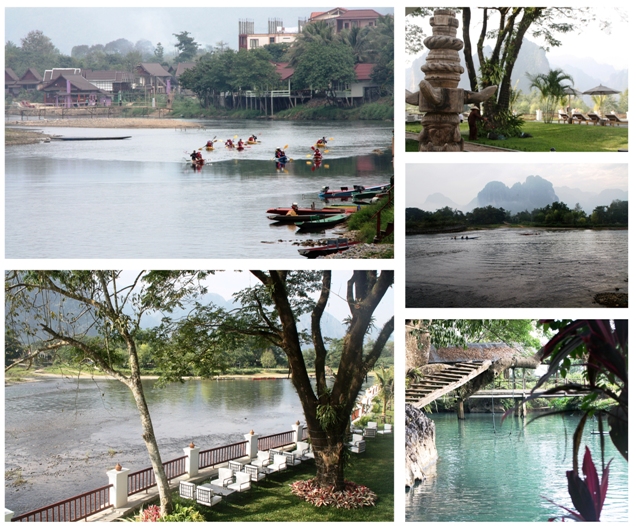 A nothing, blip of a town three hours north of Vientiane on the way to Luang Prabang, Vientiane had over the years developed a hedonistic reputation for being Party Central of Southeast Asia. A long, lazy river + inner tubes + drinks served in buckets (Lao-Lao, Laotian rice whiskey is 45% alcohol) was a winning formula for massive crowds of young revelers wanting to let loose, outnumbering the townspeople 15 to 1. It was also the cause of 20 deaths per year, reaching a peak of 27 in 2011, with countless more injuries (reportedly 5-10 hospital cases a day) from zip lines, death slides or simply jumping headfirst onto rocks. In September 2012, the government stepped in and closed down the ramshackle bars along the tubing route and relegated water activities to daylight hours only.

By the time we arrived, things were very sedate. Local businesses were shifting their attention to promoting more nature-based activities, like hiking, caving and kayaking on the gorgeous and lazy Nam Song River past limestone mountains. Even restaurants in town had the music turned way down, to almost tepid levels. Wanting a bit of refreshment, we hired a tuk-tuk and crossed the wooden bridge towards the Blue Lagoon. I had an “Icarus” moment on seeing how electric, almost glowing, blue the swimming spot really was, thanks to a strange combination of minerals in the water. The nearby Organic Farm also came highly recommended for my next visit. 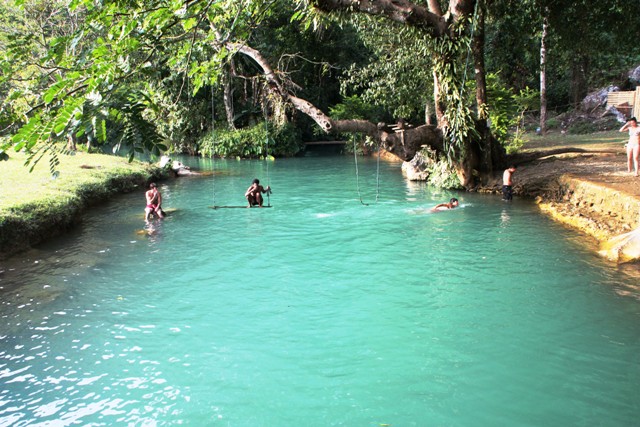 What does the future hold for Vang Vieng? Lao forums are filled with antsy backpackers asking when things will go back to “normal”. But maybe they never will. While that’s bad news for local businesses in the short term, most seem to be relieved that the party’s finally over. 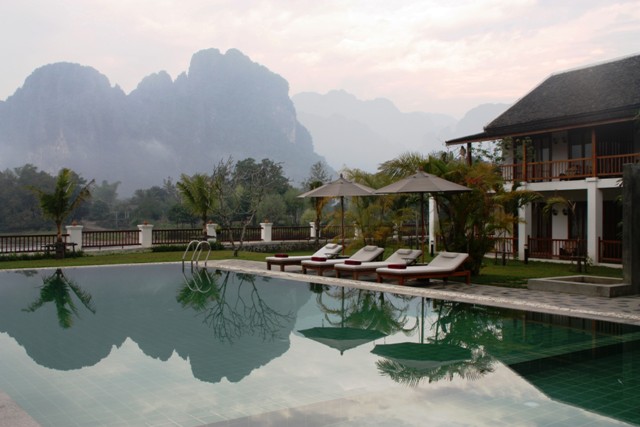 While in Vang Vieng, I was a guest at the gorgeous Riverside Boutique Resort. Newly opened in July 2012 with only 34 rooms built around possibly the most scenic swimming pool I’ve ever seen overlooking the Nam Song River and directly in front of the Phou Si mountains, Riverside apparently knew something that no one else knew, setting itself up as the only luxury hotel in town while the majority of rooms were squarely in the backpacker / guesthouse realm. 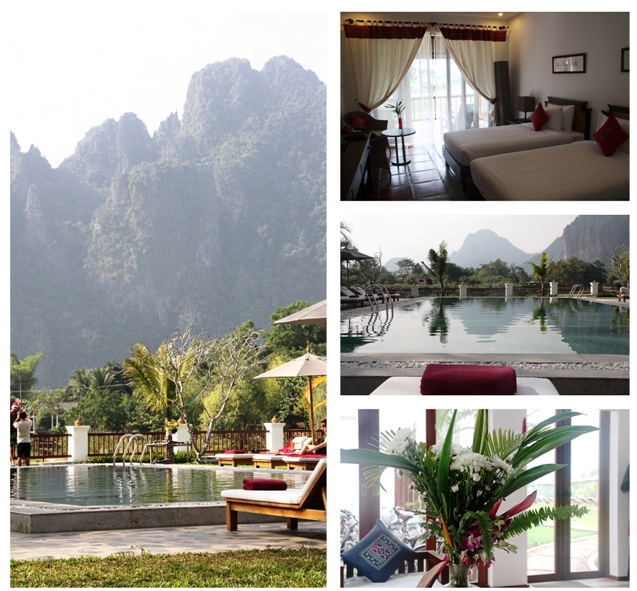 * Unbelievably, more than a month later, I saw that very same ring in a Neiman Marcus in Hawaii, of all places. How they carried jewelry from a tiny Greek designer is anyone’s guess, but I took that to mean that I was meant to have it. Yes, I paid an exorbitant amount for it, but it remains one of my favorite pieces, calling to mind a sad day in Athens that eventually came full circle.

Your turn to confess. What do you do when you travel that you don’t do at home?

17 thoughts on “Vang Vieng, Laos – Getting Its Groove Back”